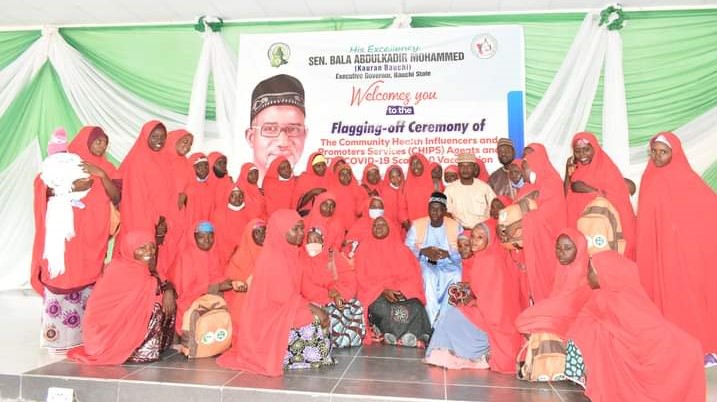 Bauchi State Government has unveiled the long-awaited Community Health Influencers and Promoters Services (CHIPS) program that would serve as community health agents at the grassroots.

The Spokesperson, PHCDA Bauchi State, Ibrahim Sani who made the disclosure in a statement on Monday said that Governor Bala Abdulkadir Mohammed acknowledged the support of the Federal Ministry of Health, National Primary Health Care Development Agency (NPHCDA) through the Basic Health Care Provision Fund, Saving One Million Lives Program for Results and other developmental partners, especially UNICEF and USAID for their humanitarian health services, both technical and financial intervention.

Governor Bala explained that the implementation of the Community Health Influencers and Promoters Services CHIPS program is “aimed at reducing morbidity and mortality, especially among women and children, through the strategic house to house demand generation for health services at the facility level, and provision of minor health care services by trained women residing in the communities.

According to the statement, He said in the first – phase of the program, the State Government recruited and trained one thousand and sixty-six (1066) individuals supported by UNICEF, noted that those trained individuals were systematically screened and selected in collaboration with the community gate-keepers, using the available structured criteria as provided by the NPHCDA.

The Chairman said other structures are Harmonization of the existing Community Structures through Engagement with partner organizations supporting community volunteers, Alignment of community-based activities, and Development of work-plan for community activities.

Dr. Mohammed further clarifies the third structure which is the Selection of the CHIPS Agents, noted that the CHIPS Agents were selected among the existing Community Volunteers being supported by partner organizations, who have previously worked on a health project.

The criteria also says Candidate should have the ability to read and write in English or a local language preferably with a minimum of primary school leaving certificate, Candidate with previous experience as community health workers such as Village Health workers, CORPS should be given priority during selection.

The Emir who doubles as Chairman Bauchi State Emirate Council Committee on Health stated that: “different fora have been established at the National, State and Local Government levels, which is also in tandem with the traditional hierarchical system.

“These include the Northern Traditional Leaders Council (NTLC), Emirate Councils Committees on Health, various Task forces on Health and the community engagement strategy.

“As community gatekeepers, as we were informed by the technical team, the CHIPS Program is aimed at grassroots mobilization and demand generation for health services including management of minor illnesses especially in the rural Community”.

Earlier while welcoming the participants, the Permanent Secretary who oversees the Affairs of the Health Ministry, Alhaji Ali Babayo appreciate the pragmatic commitment and concern of all stakeholders toward provision of effective and efficient Health system in the state.

The Permanent Secretary said the present administration under Senator Bala Abdulkadir Mohammed demonstrates high level of sense of responsibility especially for organizing the first Health Summit ever in the history of the state where experts deliberated on number of topical issues which today culminated into recruitment of 1061 Health personnel, part from the continuous engagement of medical doctors.

They expressed and delivered various Goodwill messages on the new community resource groups’ strategy and their commitment to the service of humanity.

Highlights of the occasion include distribution of bags and work schedules to the CHIPS Agents, Supervisors, and Focal Persons.