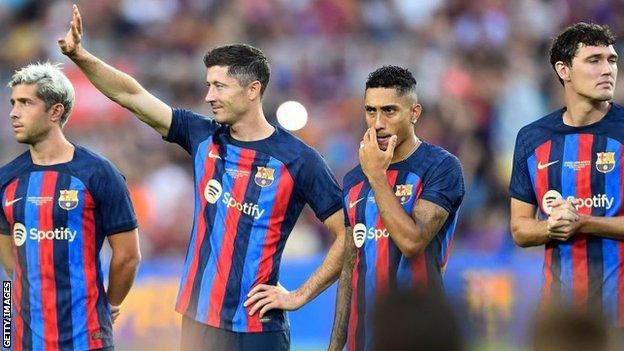 Franck Kessie, Andreas Christensen, Robert Lewandowski, Raphinha and Jules Kounde have all arrived at the Nou Camp for almost £200m, despite the club being more than £1bn in debt..

To ease the financial pressure in the short term and allow their new signings to be registered, they have sold a percentage of their future television rights and of their media production unit Barca Studios, but the approach of club president Joan Laporta has led to accusations he is gambling with the club’s long-term future.

Barca are in a deep hole and trying to get out of it. Is everything they are doing right? No. Are they doing what they are supposed to do? Mostly, yes.
‘All or nothing’ for Laporta
Laporta is repeating the virtuous circle that brought the club so much success in his first era in charge. All or nothing. Back then he also blamed previous regimes for the predicament he inherited.

Now, ignoring the financial havoc wrought by a global pandemic, he has found in immediate predecessor Josep Maria Bartomeu the perfect villain.

In fact, it was Bartomeu who separated some of the businesses that are now being sold for almost £760m, allowing the club to buy players. Clearly under the former president disastrous decisions were made on the sporting side including expensive contract renewals for famous players – and Bartomeu himself would agree with that. But not everything was bad.

There has always been a civil war at Barcelona between two sides that fight constantly for power, represented now by Bartomeu and Sandro Rosell on one hand (the Catalan establishment) and Laporta on the other.

That dynamic often forces the club president to go for short-termism to please the fans and media and not look at the bigger picture.

So Barcelona, through taking out loans and selling bits of the club, had the money to buy players. The problem though was registering them, because they were struggling to pay the new signings’ wages while adhering to La Liga’s strict financial fair play rules.

Now, however, operating under La Liga’s 1/1 rule, every penny the club saves can be invested in the new players – previously, under the 1/4 rule, they needed a four-penny saving to be able to invest one.
So now, for instance, if Gerard Pique finally agrees a massive reduction of his wages – something that seemed done but has slowed down in recent days – that will help the registration of Kounde, who will probably play in his place.

Barcelona calculate that success on the pitch represents 30-40% of the value of the brand and they also believe their brand is so strong that it will survive even one or two years without the biggest successes as long as big players wear their shirt.

In 2003, when Laporta first arrived, Barcelona had an income of 170m euros, mid-table compared with other European clubs. There was huge potential for improvement with smart decisions.

Now, though, Barcelona are at the top of the tree in terms of income, and the brand is as strong as it could be. Starting to win major trophies again will not really translate into a lot more growth in the short term. Basically, the club has already maximized traditional ways to earn money – TV rights, merchandising, tickets.

The only real way to produce growth in the medium- to long-term is through the club’s digital activities, but Laporta has just sold almost 50% of that business.

The key from now on – say the critics – is to generate cash flow but it seems the first draft of the club’s budget for next year implies operational losses. Therefore the only way to balance the revenues and expenses, and generate cash, will have to be selling more bits of the institution.

So Laporta’s vision carries many risks – and it needs success on the pitch.

How successful can they be on the pitch? Lewandowski – their new icon – is not Ronaldinho. And that success in Laporta’s first era was also based around local products, as well as Messi of course.

Pedri looks like Andres Iniesta, but I can’t see a Xavi, a Sergio Busquets, a Carles Puyol or anything close to the best Messi at the team now.
The team has got quality and will win most games based on that quality. What is not clear is how they will perform against the biggest sides, when more will be required.

Saturday’s opening-day goalless draw with Rayo Vallecano suggests it is clearly a work in progress. But the manager, and the very optimistic Laporta, insist they will get there.

And isn’t that one of the keys of football? For a team and a club to give hope. Imagining a better future is part of the job of a club and a manager.

What happens if success does not arrive on the pitch? Investment bank Goldman Sachs is providing 2bn euros to the club in various loans and I am sure it would be ready to take over if necessary.
Even though the credit extended to rebuild the stadium (1.5bn euros) is a great deal for Barcelona because they don’t need to pay it back until they start earning money from the new installations, if everything goes wrong the club would end up in private hands.

In any case, Barcelona does not belong fully to season ticket holders anymore; they share that ownership with those that have bought parts of the club.

‘La Liga is alive and well’
Why so much negativity about Barcelona – and La Liga – coming from England?

OK, I fully understand that when you are repeating ad nauseum that you are a special club, unlike any other, and then you don’t behave like it, the backlash is inevitable.

But let’s tell another story. This is a massive club looking to survive in a post-pandemic world that has changed massively in the last decade anyway, with rival clubs backed by states and a Premier League hugely superior in financial terms.

A fascinating prospect, no? So why the apparent desire in many quarters to see Barcelona continue to struggle? In some cases I think there is an element of the jealousy and resentment many big clubs attract, while others are sad that the old romantic version of Barcelona is over and they are becoming just another club.

Certainly the club’s behaviour towards Dutch midfielder Frenkie de Jong is scandalous. Not for the first time, a club is trying to push a player out to remedy its own mistakes.

But all in all, what I see is a continued fascination with La Liga and its clubs. When compared with the Premier League, the common refrain of recent times is that La Liga is dead or dying. Then Real Madrid win the Champions League. I guess nobody likes to be wrong – maybe that explains some reactions.

La Liga is alive and well and this year, if I were you, I would keep an eye on it. More fireworks are expected.
(BBC)