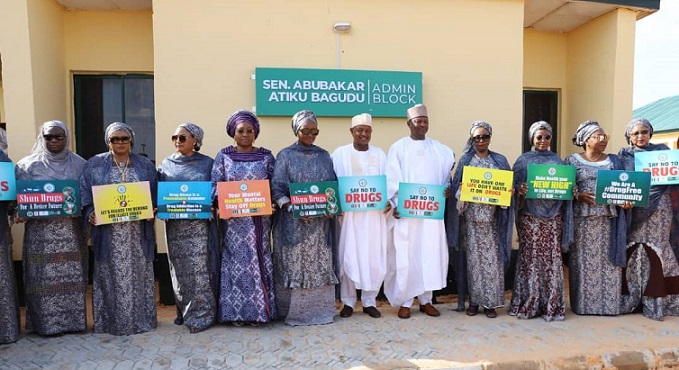 The Chairman of the APC Governors’ Forum spoke on Saturday in Birnin Kebbi when he commissioned the Kawara Sports and Recreational Centre.

The establishment of the recreational center is part of the efforts of Dr. Zainab Shinkafi Bagudu, the wife of Kebbi State Governor in addressing the drug menace in the state.

The event also coincided with the t022 International Youths Day, as well as the quarterly meeting of the Wives of the Northern Governors under the aegis of the NGWF.

The Kebbi State Governor emphasized that all hands must be put on deck by all the stakeholders to make society drug-free.

Bagudu acknowledged the unwavering commitment of his wife to curb the drugs menacing in northern states and Nigeria in general.

He also lauded her for providing credible leadership to the state’s drug control committee as well as diligently being a supportive pillar to him.

Bagudu also commended the members of the forum as well as those of the national level for being worthy and dependable allies to their spouses.

Malami in a remark said Bagudu and his wife are religiously committed to the even socio-economic development of the state.

He described their commitment to eradicating the drugs menace as unparalleled and said that the center will provide an avenue for the youths to positively use their abundant energies.

Addressing the gathering Dr. Zainab Shinkafi Bagudu said the center would help to reduce the incidence of drug abuse and lauded her husband for his sustained invaluable support to ensure the success of all her activities.

She described youths in the state as very vibrant, energetic, intelligent and very innovative. By investing in education, agricultural diversification, technology and innovation, this administration has made a mark which history will reveal,” she averred.

While acknowledging Kebbi State government under the leadership of Atiku Bagudu, Dr Zainab further mentioned some of the programs she initiated to reduce drug abuse as well as highlighted the collaboration between the State and Development Partners like the United Nations Office on Drugs and Crime to fight the issue of drug abuse in the State

In her remarks, Chairperson of the Northern Governors Wives’ Forum, Hajiya Hadiza Isma El-Rufai commended Bagudu and his wife for kind and warm reception.

She acknowledged the support of Bagudu in ensuring the VAPP law and Child Rights Act, as well as logically implementing myriads of other people-oriented policies and programmes in the state.

Also speaking at the event, the Chairperson of the NGWF, the wife of the Ekiti State Governor, Mrs. Bisi Fayemi, said they have been working hard to support their husbands to deliver the direly needed dividends of democracy.

In his goodwill message, the NDLEA Chairman, rtd. Brig.-Gen. Buba Marwa represented by a director in the agency, Mrs. Ngozi lauded Dr. Zainab Shinkafi Bagudu for doing a lot to stem the tide of drug abuse in the state, particularly the ‘Unplugged Program’, she initiated, the only one launched in Nigeria.

Also speaking at the event, the Chairman of the State Taskforce on drugs control set up by Kebbi State Government, Rtd AIG Umar Umar Ambursa said the committee was working round the clock with stakeholders to stem the menace of drug abuse in the state.

According to him the committee has already established offices in all the 21 local Government Areas of the State, he added.

Development Partners and other stakeholders delivered goodwill messages. Highlights of the event featured Commissioning of Kawara Sports and Recreational Center by Governor Atiku Bagudu flanked by the Minister of Justice, Abubakar Malami, (SAN) and the 19 wives of the Northern Governors.