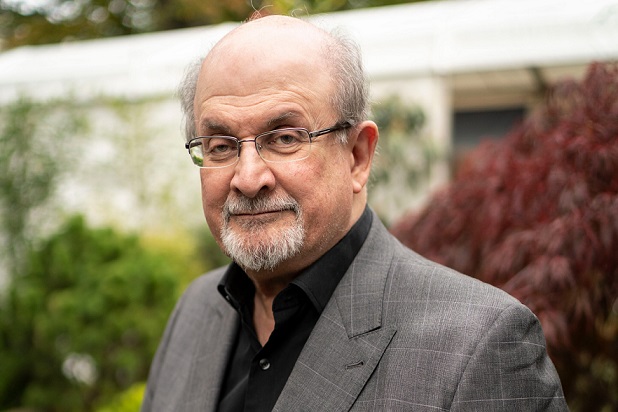 Yesterday was Friday, 12th August 2022, the day the world was greeted with the viral news that Salman Rushdie, the man whose novel, “The Satanic Verses” drew death threats from Iran’s leader in 1989, was stabbed in the neck and abdomen, by a man who rushed to the stage as he was about to give a lecture in western New York, United States of America. Bloodied Rushdie was flown to a hospital, where he underwent surgery.

According to sources, the writer was on a ventilator as of yesterday evening, with a damaged liver, severed nerves in his arm and an eye he is likely to lose.

Police identified the attacker as Hadi Matar, 24, of Fairview, New Jersey, who was arrested at the scene and was awaiting arraignment. Matar was born a decade after “The Satanic Verses” was published.

The police said the motive for the attack was unclear but methinks the police are being economical with the truth, by avoiding revealing the actual reason why Matar turned into a martyr, by making such sacrifice for the sake of a principle.

Yes, Salman had committed a sin in the publication of the satanic verses, the sin of which resulted in a fatwa, that drew the death penalty from the Islamic teachings, as announced by Iran’s leader.

Since then, Salman was forced into hiding, as the book was banned in Iran, and a $3 million bounty was put on his head. Impliedly, Salman’s sins were adjudged by Iran to surpass any rush for rescue by anyone, anywhere in the world.

And maybe, Matar turned martyr not only in response to the fatwa of the Iranian leader Ayatollah Ruhollah Khomeini but also pursuant to a hadith, thus:

In the execution of the martyrdom of Matar, Friday came as a coincidence, and, according to the Qur’an, the central religious text of Islam, which is believed by Muslims to be a revelation from God, Friday is a sacred day of worship. Perhaps, Matar answered the call for worship.

For him, Rushdie is another word for Rush-die, as such, he must be rushed to death, because, Salman’s sins, surpassed the rush to rescue Rushdie. And doing so on a Friday may be a good deed for the day.

By the Arabic definition, the name Salman stands for the obedient, disciplined, humble, loyal, devoted, faithful, observant, sincere, truthful, submissive, yielding, compliant, pure, genuine, or taintless, but here, in his book, the satanic verses, this particular Salman had acted in the reverse. So, Salman’s sins surpassed the rush to rescue Rushdie, hence the name Rushdie is seen as synonymous with rush-die. Matar must have rushed to the stage to rush Rushdie to death.

Sir Ahmed Salman Rushdie is an Indian-born British-American novelist. His work often combines magical realism with historical fiction and primarily deals with connections, disruptions, and migrations between Eastern and Western civilizations. However, in the case of the satanic verses, he chose to go blasphemous, an unpardonable offense to the Muslims.

Many have condemned the pronouncement of death on Rushdie, particularly members of the Human rights organizations, who are advocating for human rights through identification of their violation, especially in the US, where such violations run contrary to US values.

But in a tweet by Craig Considine, an Irish-Italian American scholar of Islam, and a faculty member of the Department of Sociology at Rice University, he said, speaking sacrilegiously about God or sacred things, including blasphemy on Muhammad, the prophet of Islam, runs contrary to the pronouncement of the US Supreme court, which, honors Prophet Muhammad as one of the greatest lawgivers in history.

Havard University law school recognizes the Quran as one of the leading books for justice in the world. Craig said he shares these facts when people say Islam is incompatible with US values.

Like Rushdie, Considine is an award-winning professor and the best-selling author of The Humanity of Muhammad, the very Muhammad, that was blasphemed by Rushdie.

So as far as some Muslims are concerned, one of whom is martyr Matar, the sins of Salman, surpassed the rush to rescue Rushdie.