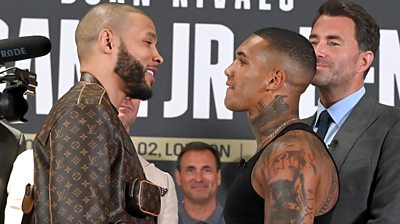 Benn is coming up two weight classes to fight Eubank Jr and the pair argued throughout a lengthy media conference in London.

Eubank Jr suggested the weight cut to 157lbs would leave him at “60%” for the fight.

“If I lose to Conor Benn I am finished,” he said.

Addressing his rival, he added: “I’ll be 60% on the night and that’ll be enough to do whatever I want with you.”

Nigel Benn and Chris Eubank Sr were not present at the media event, but the memory of their own rivalry was ever present.

Eubank Jr gave a passionate speech about his decision to accept the fight and undergo what will be a big weight cut given he usually operates at middleweight.

“I don’t hate anybody I would ever give anyone that type of power over me. I don’t even dislike Conor,” he said. “But at the same time this fight is personal. The things his father put my father through, I can’t forget and I can’t forgive.

“I watched the mental toll and the injuries. Him going to hospital and losing half his tongue. I watched Nigel tell my father on national TV that he hated him.

“These are things I can’t forgive. This is a fight where our family names are on the line and we have to uphold them. That’s where it makes it personal.”

Benn responded: “It’s not that deep.”

‘My dad sowed the seed’
Benn is seven years younger than Eubank Jr and wasn’t even born when their fathers last fought.

But the 25-year-old Benn revealed it was actually his father, Nigel, who first put the idea of fighting Eubank Jr in his head.

“He was the one who sowed the seed. After one of Chris’ fights, he told me ‘I reckon you beat him’,” Benn told BBC Sport.

Eubank Jr, 32, was by far the more relaxed figure in their first media meeting. Benn appeared on edge, as is normal for the young fighter who has spent years trying to fight his way out of his father’s shadow.

“He is a carbon copy of his dad and I am as well. It is for legacy. I believe my dad won the rematch and they never had the trilogy,” Benn continued.

Can the sons possible live up to their father’s legacy?
Organizers are expecting a lot from this fight.

As well as regular promotional posters there was also two large – and probably very expensive – life-size cut outs flanking each fighter, complete with their own profiles and slogan.

Benn’s read ‘for legacy, for boxing’, while Eubank Jr’s said ‘born rivals’. There was a red carpet in the adjacent room. It was every inch a big fight press conference, despite the apparent mismatch on paper between the largely untested and smaller Benn and the battle-hardened and experienced Eubank Jr.

Eubank Jr settled into the role as the orator early on – just as his father did 30 years ago – and was regularly challenged by the fiery Benn. He listened intently to what Benn had to say, but described a victory for his rival as ‘impossible’.

It was a testament to the selling power of the two fighters that promoter Eddie Hearn mostly sat back for the press conference, allowing the fighters to take center stage.

The fight will certainly attract big interest and Benn and Eubank Jr put on an entertaining show for the gathered cameras. They faced off for over a minute, occasionally chirping at each other as they did.

Their fathers’ rivalry rightly went down in history as one of the best ever. It was a competitive match-up decided by the finest of margins, defined by heart and drama. Can Eubank Jr and Benn produce the same fireworks?
(BBC)