Menu
Home Politics “My Reference to Pope, A Mark of Reverence Not Ridicule” – Lalong
Politics 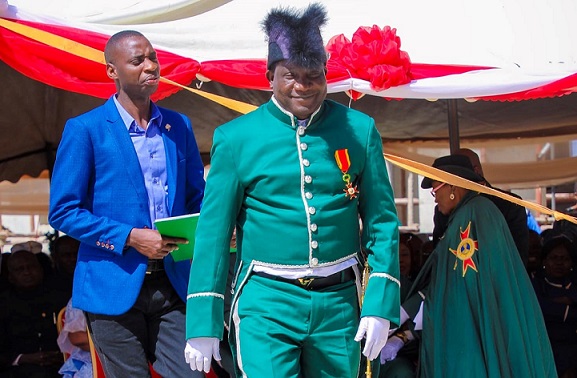 Governor Simon Bako Lalong of Plateau state has said that contrary to insinuations and misconceptions being imputed into his interview granted to State House Correspondents at the Presidential Villa where he explained that as a Catholic and a Papal Knight, the Pope has not told him that accepting the position of Director General of the APC Presidential Campaign Council was wrong, the statement was out of reverence and not disregard for the Holy Father, Catholic Church or Christianity.

Lalong who spoke through his media aide, Dr. Makut Simon Macham, in a statement, Thursday, said it was unfortunate that part of the interview has been excised and used by politicians for propaganda and misinformation about his personality, faith, and political persuasion.

He said: “My reference to the Holy Father the Pope was to emphasize that as a Christian born and raised in the Catholic faith, accepting the assignment given to me by my party the APC of which I am a founding member does not in any way remove my faith in Jesus Christ or my commitment to the Church in Nigeria and universally.

“Those who know me can attest to my respect for the Church, Christianity, and Spiritual Fathers of all denominations. They know my modest contribution to the growth of the Church in Plateau State, Northern Nigerian, and Nigeria at large and can testify to it”.

He, therefore, reiterated that he has the highest regard for Christians and Church Authority and will continue to work hard in promoting the interests of Christians and adherents of other religions based on love, justice, equity, and fairness which are encouraged in the Holy Bible and the Constitution of Nigeria.

According to the statement, Lalong further emphasized that although he understands and appreciates the concerns of Christians over the emergence of Muslim, Asiwaju Bola Ahmed Tinubu as APC Presidential candidate and the choice of Vice-Presidential nominee Senator Kashim Shettima also a Muslim, the situation does not warrant Christians within the party leaving the party or refusing to accept responsibilities because being within a system makes it easy to address grievances than being outside.

Besides, he said the emergence of Asiwaju Bola Tinubu was not on a religious basis as even Christians voted for him during the APC Primaries.

He also appealed to Nigerians irrespective of religious persuasions to unite and work towards addressing the major challenges of the nation by actively participating in the political process and ensuring they push forward their interests rather than allowing religious sentiments to override their desire to assess issues from a wholistic perspective.

The APC Presidential Campaign DG assured that a series of consultations with religious, traditional, professional, youth, women, and other groups are being fashioned out to deepen engagement and remove misconceptions about the candidature of Asiwaju Bola Tinubu and Kashim Shettima whom he said have a track record of treating people fairly and justly irrespective of ethno-religious differences.

‘Messi is loved!’ – PSG coach Galtier gushes over star after seeing him up close