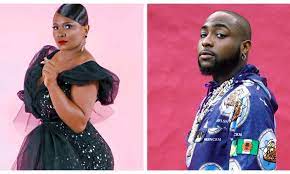 Controversial Nigerian Actress, Sonia Ogiri has given her opinion of how Davido and ex-lover, Chioma Rowland relationship panned out after the Singer was spotted with his second son in public for the first time.
O.B.O and his son, Dawson, attended UK-based celebrity Pastor Tobi Adeboyegba’s church on Sunday.

Reacting to the shocking revelation, Actress Sonia Ogiri took to her Instagram story and claimed that Davido and Chioma, after a family introduction were expected to get married but the wedding did not happen because she fell from being his wife-to-be to Babymama.

“I don’t know who advised Chi to join the babymama table after the much love he showed publicly which we all saw clearly how he was ready to marry her, not getting pregnant in the mist of that hot love would have made them end up together by now, you know when e dey hot hot.

The movie star also advised the singer to quit his baby daddy lifestyle and settle down with either of his Babymamas, Sophia Momodu or Chioma Rowland.

“Who else is thinking what I’m thinking? After seeing Davido’s 4th child, is high time we pray for his marriage. My love for him is incomparable to another hence I tag him my BEST artist in the world

Please Davido, No more baby mama, if you won’t settle with Chi who we’ve been praying for, we will be so happy for you to take your first love Sophia.”
(Gistlover)