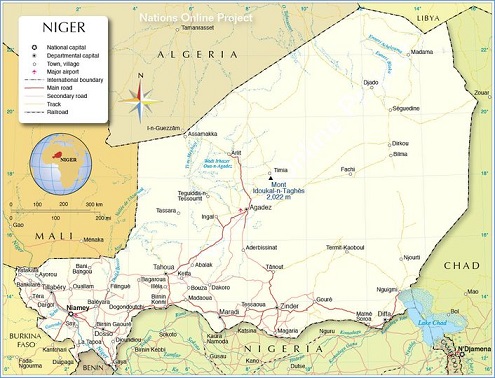 “When Nigeria sneezes, Niger not only catches cold, it is already on admission in the hospital.”

Recently, there has been a lot of very heated criticism from some sections of the nation on a N1.14 billion FG car-gift to our most northerly Francophone neighbours.

Understandably, many Nigerians are still seething over Mr. President’s, “I have first cousins in Niger Republic.”

Buhari had made that statement in an exclusive interview with AriseTV in June 2021 when justifying the expansion of Nigeria’s railway infrastructure to Maradi.

That notwithstanding, it would have made more sense if the car-gift controversy had been centered around openness and transparency of the process or the clueless idea of supplying V8 luxury cars for security purposes.

Even at that, why Innoson Motors had not been the suppliers of such vehicles instead of empowering a Japanese brand is the fundamental issue for me.

President Buhari’s sprawling commercial farm and ranch located in his hometown of Dumurkul is a mere 5 km from the Kongolom border post which lies on the intersection of the land border meandering from Kebbi to the Lake Chad region for a total of 1608 km.

Compare that with the driving distance between Maiduguri and Lagos at 1579 km and between Sokoto and Calabar at 1298 km.

How many of us are aware that, as of March 2022 over 300,000 of our compatriots are seeking refuge in the Niger Republic due to the perennial insecurity in the Nigerian border region?

Please note, that there are also 20,000 and 180,000 Nigerians in various camps in similarly atrocious conditions in Chad and Cameroon respectively.

These figures quoted were officially supplied by our National Commission for Refugees, Migrants and Internally Displaced Persons (NCFRMI)

The United Nations High Commission for Refugees (UNHCR) adds that just between January and March 2022 a total of 71,289 Nigerians sought refuge in the Niger Republic through Sokoto state.

No doubt, President Buhari was nepotistic in preferring Maradi over Zinder, the commercial capital of the Niger Republic that attracts much more fellow Nigerians on business there.

For centuries, Agadez used to be the main entrepôt but when the Lagos railway line reached Kano in 1911, Zinder took over as the influence of Trans-Saharan trade collapsed due to the growing influence of the Apapa quays.

Therefore, badmouthing largesse to the Niger Republic is tantamount to cutting your nose to spite your face. Lest we forget, the caveat of due process and Innoson Motors.

Take a good look at the attached map north of Sokoto because the following excerpts of incidences are from that axis.

1. “Samson Kenneth, 42, was just a teenager when he left Enugu State in search of a better life in Ilela, a commercial town in Sokoto State that shares a border with the Republic of Niger to the North.

After spending 25 years of his life in the dusty town known majorly for its thriving cattle market, Kenneth, now a successful businessman, lives in fear and cannot afford to pass a night with his family in the community he had accepted as home.

In August 2021, he abandoned his bungalow in Ilela for a rented, three-bedroom apartment in Birni-N’Konni, a town in the Tahoua Region of Niger Republic.

His decision to migrate was not borne out of a love for tourism but for safety after a traumatic, life-altering experience he had with bandits that are presently holding the area in a chokehold of death. Kenneth, who is a tyre retailer, told our correspondent during an interview in his store that Ilela community enjoyed relative peace until recently when it became a hotbed of bandit attacks.

Augustine Chukwugbata is another resident affected by the insecurity in Ilela and he also nurses great fear over his safety. The 36-year-old, whose store is located opposite Kenneth’s, told our correspondent that he realised that the community was no longer safe after Kenneth’s ordeal.

Although Chukwugbata and Kenneth hailed from the eastern parts of the country and do the same type of business, their relationship had over the years, transcended that of mere business associates to deep friendship.

“I also built a house in Ilela but due to the insecurity, I relocated to Niger and rented a house. It is quite expensive to rent an apartment there,” he lamented. Chukwugbata stated that since he secured an apartment, had accommodated at least five Nigerians, who like him and Kenneth, spent only the night in the area.

Asides from having to wake up early to embark on the torturous journey of 92 kilometres to Ilela for the day’s business, Chukwugbata said that Nigerians were exposed to several dangers during the daily commute.”

2. “Nine soldiers fleeing bandits’ assault in Sokoto have been rescued by Nigerien troops. The Nigerian soldiers were rescued at Basira, a border village under Gidan Roumdji district of the Niger Republic.

Although the attack took place in the early hours of Friday, the information did not filter in until Sunday as the area is affected by telecommunication shutdown currently in force in Zamfara State and parts of Sokoto and Katsina.”

See details in, the Daily Trust newspaper edition of September 27, 2021