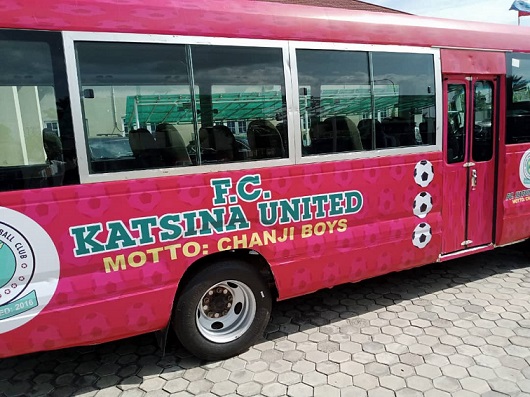 The presentation ceremony was held at the Kano Government House on Tuesday evening.

Presenting the renovated bus on behalf of the Kano State Acting Governor, Dr. Nasiru Yusuf Gawuna, the Chairman of Kano State Sports Commission who doubles as Acting Chairman Kano Pillars football club, Alhaji Ibrahim Galadima said the perpetrators of the incident has not achieved their mission because their intention is to destroy the existing relationship between Kano and katsina States and thank God it was not successful.

He thanked Katsina state people, particularly football lovers for their support and cooperation to Sai Masu Gida when they were banished to Katsina and Played some of their home matches successfully in the just concluded 2021/2022 Npfl Season.

Responding shortly after receiving the bus, the Chairman of Katsina United football club, Alhaji AbdulSamad Badamasi thanked the Kano State government for fulfilling its promise of repairing the bus.

He assured that the cordial relationship between the two states would remain intact.

“We believed that the unpatriotic football supporters that vandalized our bus are the enemies of Kano Pillars and katsina United football clubs and by God grace, our relationship will remain untouchable,” Alhaji AbdulSamad said.