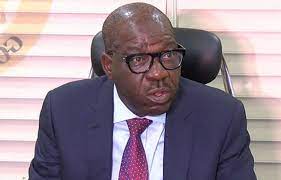 Edo State Governor, Godwin Obaseki said he increased the minimum wage from N30, 000 to N40, 000 due to the harsh economic reality in the country.

He said the increased minimum wage as well as payment of the harmonized pension to retirees was to provide succor to workers and pensioners.

Obaseki stated this in Benin while speaking on his policies.

The Governor according to the statement said his government remains committed to the welfare of workers and would sustain policies and programs that can deliver quality service to the Edo people.

“I want to assure workers in the state that, as a government, we feel their pains. We know that things are tough and wish we had more resources as a state government for our people.

“The N40, 000 minimum wage we introduced was because of the pain our people are facing.

He said as a government we will make sure we get those in charge and responsible for managing the country at the national level to stop this pain.

Obaseki however commended workers for the harmonious relationship existing between his government and the state workers.

Recall that governor Obaseki had on 2022 Workers Day announced the payment of harmonized pension to retirees in the state after 21 years, as well as the increment of the minimum wage in the state from N30, 000 to N40, 000.