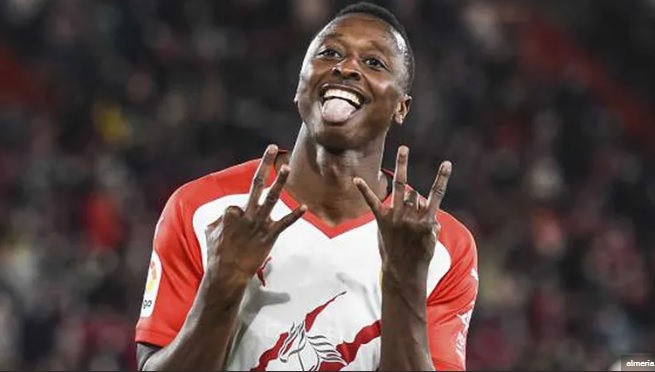 Nigeria striker Umar Sadiq is on his way out of newly-prompted Spanish La Liga side Almeria after the club’s CEO Mohamed El Assy confirmed they have accepted a €30 million bid for him.

Sadiq, who has been with Almeria for two seasons, helping them to top flight promotion last season, has been the subject of speculation this summer with Villarreal particularly credited with an interest while Borussia Dortmund have been the latest rumored interested club.

The striker missed Almeria’s final pre-season match against Saudi Arabia champions against Al-Hilal in Burton, England on Sunday and El Assy has now confirmed that his absence was because a sale is imminent.
“Umar Sadiq has not travelled to England to avoid any type of injury that could stop a transfer that is close at this time,” El Assy told Mundo Deportivo.

“He will be sold for a little less than €30 million. We have 12-13 other players that have received offers, they are players who have a prestige in the market and you hope that they have a great future.

The Kaduna-born striker, caped seven times for the Super Eagles who he has scored one goal for, has been too hot to handle since joining Almeria from Serbian club Partizan Belgrade in October 2020.

The Nigerian was brought in to replace now Liverpool striker Darwin Nunez when he left Almeria to join Benfica two years ago and needed little time to settle in as he scored 22 goals in his debut campaign in Spain.

He was Almeria’s leading scorer in 2021-22, managing 18 league goals (19 in total) as the Andalusia club secured a return to the top flight after seven years in the second tier, having finished the season top of the table.

While his next destination is still unknown, whoever signs the Nigerian will be getting a proven goal scorer given the 25-year-old hit 41 goals in 74 games in two years at Almeria.

Villarreal are looking for more firepower to bolster their ranks after finishing a disappointing seventh in La Liga last season with injuries to Gerard Moreno disrupting their season.

Dortmund, meanwhile, are in the market for a striker again after new signing Ivory Coast international Sebastien Haller was diagnosed with testicular cancer last month, keeping him out for an unspecified period of time.
(Goal)