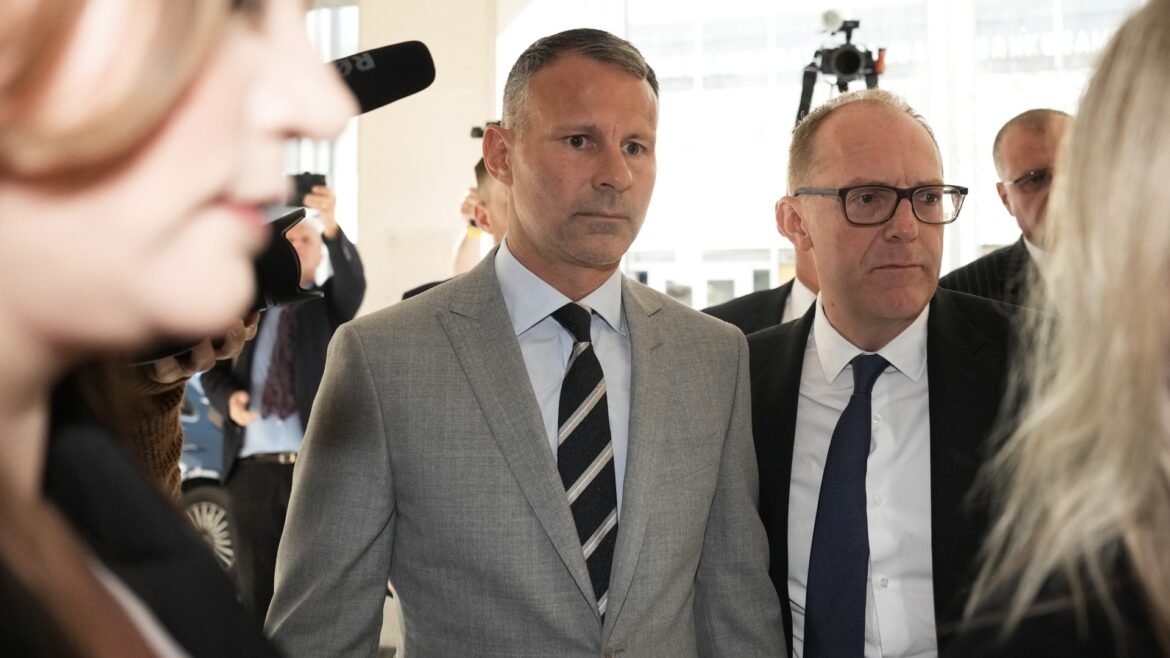 The former Wales manager is accused of assaulting his former partner

Former Manchester United and Wales star Ryan Giggs threw his then-girlfriend out of a hotel room naked, a court has been told. Giggs is on trial after being accused of controlling and assaulting his former girlfriend, Kate Greville, and her younger sister Emma.

In an interview heard in Manchester Crown Court on Tuesday, Greville, 36, told detectives Mr Giggs was her “best friend and her soulmate” but he became “abusive and nasty”.

The interview with Greville went on to detail her accusations towards Giggs, which include assault, blackmail and manipulation
What allegations were made against Giggs?
On Monday, prosecutor Peter Wright QC said in court that, during a November 2020 incident, Giggs “entirely lost self-control and he deliberately headbutted [Greville], thereby causing swelling to her lips and bruising”.

“He just came at me from nowhere, grabbed me by my shoulders and head-butted me in my face,” Greville added on Tuesday in her interview with detectives.

Greville then claimed Giggs asked her to think about what had happened, about his career and his kids.

Wright had said that was just one instance of abuse over a three-year period, and that Giggs exhibited a pattern of “sinister” behaviour towards his then-girlfriend

Greville, who said “the whole life was a lie”, told detectives that Giggs had once “flipped’ in a hotel room after she confronted him about messaging another woman.

Giggs then allegedly grabbed Greville and “dragged” her naked across the floor before throwing her and her belongings into the corridor in a situation she said left her “humiliated and embarrassed”.

While discussing claims that Giggs had both sent her naked pictures and threatened her with blackmail, she added: “I had no control of what he could do or his actions. Just helpless, I guess. I just had to do what he wanted all the time. I had to pander to all his needs.”

Greville also described another incident that allegedly occurred during a trip to Dubai in February 2020.

After a night of drinking, Greville claims Giggs asked her to leave, but then stood in her way and grabbed her bag, causing her to fall and injure herself.

The relationship continued after the alleged incident, Greville says, “because he made me feel like I was so alone, so isolated.”

Throughout the affair, Giggs had allegedly told Greville of his plans to leave his wife.

“Then I found out he had not. That went on for about nine months and then I decided he is not going to split up with [his then-wife], that is not happening,” she said.

Eventually, Ms Greville said she gave him an ultimatum before moving to Abu Dhabi to “get away from him”.

The trial is expected to last about 10 days and continues.
(Goal)

Serena Williams suggests retirement from tennis after US Open

It’s a waste to be prayerful while listening to wizkid’s song – Mummy G.O