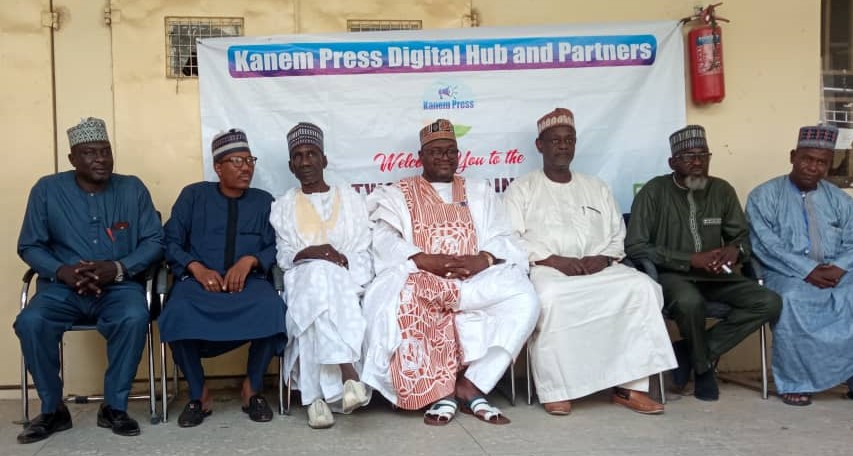 Welcoming participants at the opening day of the program on Wednesday, the President and Founder of Kanempress Digital Hub, Ibrahim Mustapha, explained that the participants were selected based on certain criteria and considerations.

According to him, the purpose of the workshop was to sensitize communities of the lake chad region of Borno and Yobe States on the importance and inherent values of historical sites and monuments. Bridging the gap as a viable economic opportunity for the states of Borno and Yobe.

The convener of the training, Ibrahim Mustapha, charged the participants to start writing analyses and investigative reports on the numerous challenges bedeviling not only the historical sites and monuments but also many other good things and the resilience of Lake Chad region. And the region is not only about Boko haram but many other good things, Mustapha said.

Kanempress DigitalHub, an independent Borno and Lagos-based news platform have held a two-day capacity-building workshop for youths in Borno state’s northeast region to equip and expose them to the ethics and nitty-gritty of reporting historical sites and monuments, as well as the potentials and opportunities in the Lake Chad Region, with a focus on Borno and Yobe states.

The training is being held under the Collaborative Media Engagement for Development, Inclusivity, and Accountability Project, an initiative of the Wole Soyinka Centre for Investigative Journalism (WSCIJ), supported by the MacArthur Foundation.

The day’s one guest speaker, Dr. Nasir Abba Aji says there is a need for the government to pay more attention to the issue of monuments and other historical heritage. This will in no small way boost the socio-economic aspect of the country.

The other speaker, the manager of Rabih House Dikwa, Mr. Daniel Ishaya, said that Borno and Yobe are older than Nigeria itself. In fact, if the government can channel huge resources, it can boost tourism and will be a multimillion-dollar industry in the country. We at the national commission for museums and monuments are doing all our best toward discovering ancient monuments that will break old records.

Borno, and indeed the Lake Chad region, have a significant number of heritages that will help to reshape the history of the world. The number of scholarly books and other wonders of Borno is such that even Timbuktu cannot override the legacy of the Knem Borno empire.

Borno has a diplomatic relationship with the then world power, Turkey. This will definitely boost the tourism industry and other related matters.

The professor, Prof. Khalifa Dikwa, also maintained that the Lake Chad region and indeed Borno and Yobe are prominent places where those who know what it contains cannot joke about it. The government has done its best, but there is still more to the issue.

Borno is a home of historical legacy. Researchers from Germany and other western countries are eager to come and explore more historical legacy. With the support of the government, research institutions, non-governmental organizations, traditional institutions, and other stakeholdersthere will be a huge discovery of not only local and national monuments but also international ones.

“We have presented several papers in relation to the potentialities of the region. Surely, collective efforts are going to be made in order to discover more historical heritage and monuments.”

Dr. Zanna Hassan Boguma, further in his paper, explained that the Lake chad region, which consists of Borno, Yobe, and other places, is rich in everything great and the land can grow anything. That means that the land of lake chad is exceptionally fat.

According to him, over forty million people are beneficiaries of these waters. In fact, the oldest canoe in Africa was discovered in Yobe state; that was the Dafuna Canoe. And there is a need for the government, traditional institutions, and other stakeholders to work together to explore so many ancient monuments and heritage sites that will aid in understanding the rich history of Borno in particular, and the Lake Chad region in general.