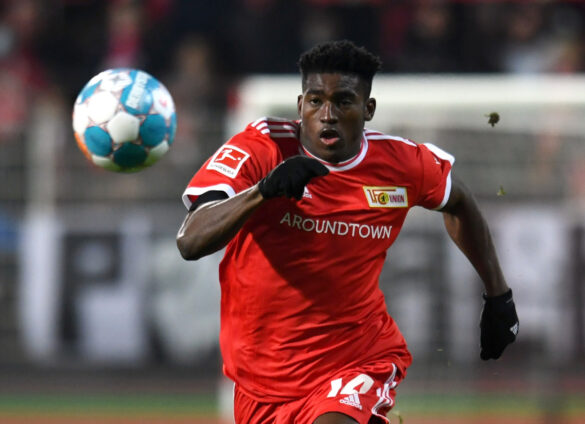 Taiwo Awoniyi made his Premier League debut as Nottingham Forest bowed 2-0 to Newcastle United on Saturday.

With the visitors still trailing by a lone goal, Awoniyi was introduced for Sam Surridge three minutes after the hour mark.
Nonetheless, the former Union Berlin goal machine could not stop Steve Cooper’s men from crumbling against the former English champions.

After a goalless first half, the Magpies took a 58th minute lead. Forest thought they had cleared the danger, but Schar drifted unchallenged to the edge of the area before unleashing an unstoppable shot past Dean Henderson.

Eddie Howe’s team secured all three points in the 78th minute to send the visitors home empty-handed, after Joelinton’s cutback appeared to be behind Wilson, but the striker produced a fantastic finish with the outside of his foot to lob Henderson.

For Awoniyi’s contribution, he accounted for zero shots, zero passes, eight touches, four passes and a passing accuracy of 75 per cent.

After impressing for the Berlin-based club in the last campaign, the 24-year-old completed his move to the promoted Premier League side after penning a five-year contract.

Awoniyi revealed his readiness to get going at Forest, adding his main focus will be to score goals and fight for every challenge.

“When I look at Forest and look at the history of the club, it’s even more about the team. This is the kind of place I love to belong to and I am ready for it,” he told the club website.

“Every striker wants to score goals, but I’m ready to work for the team, to fight for every ball, to win every challenge, that’s my style and that’s what I’m here for.

“My dream is to always keep working and I see him as a person who I can develop under. For me, it’s always about hard work, dedication, and believing in God. When I look back at the games with Union Berlin, it was always about the team for me.”

Notwithstanding his unimpressive stats against Newcastle United, the Nigeria international would be aiming to register his first league goal against West Ham United on August 14.
(Goal)

78% of Chefs Are Men, They Have Left the ‘Unpaid Kitchen’ For Us – Actress Mary Njoku