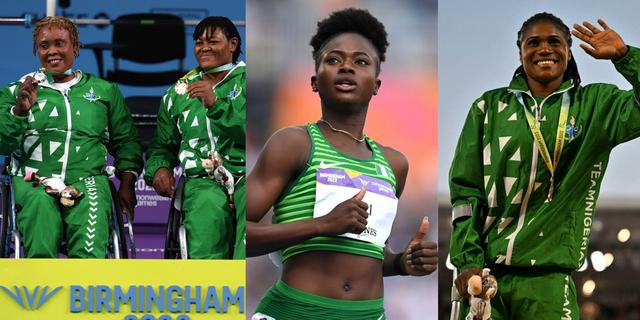 Three of those medals came from Para Powerlifting while the other was from the Women’s Discus Throw.

Folashade had a cumulative 123.4 points in an incredible performance winning yet another Gold medal.

She lifted a series of: 130kg, 150kg & 155kg to break her own world record on route to the Gold medal.
Omolayo finished second behind her compatriot to take the Silver medal. Omolayo lifted 145kg and scored 115.2 points in total.

She became the Commonwealth Champion and World Record holder with a throw of 36.56m.

Athletics
Team Nigeria had tough luck in the women’s 100m final as the duo of Rosemary Chukwuma and Grace Nwokocha finished in 4th and 5th place respectively.

Oshoba defeated Tianna Guy🇹🇹 by 3-2 (Win on Points) in the women’s 54kg-57kg Featherweight category and Ogunsemilore won hers against Aratwa Kasemang by RSC (Referee stops contest) in the over 57kg – 60kg Lightweight.
(Pulse)