Brigade of Guards: A Special Tribute to Recent Losses 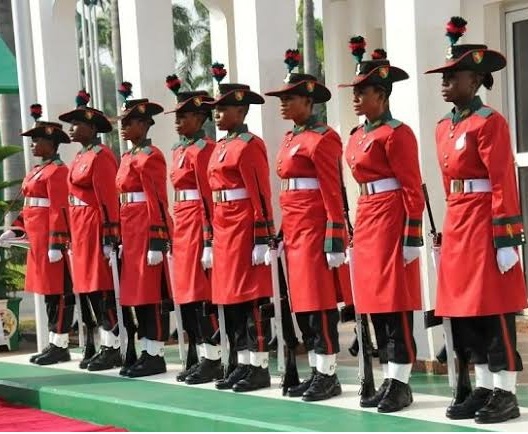 Any traveler into and out of Abuja by road must pass through a checkpoint or two manned by the best-kitted Nigerian soldiers. They are often stern and taciturn but suave and polite. I remember one after noticing my grey enunciated, “Welcome to Abuja, Baba”.

Indeed, they are our sons. And now increasingly, our daughters. The Praetorian guards of our nation.

One does not have to personally know any of them to feel a deep sense of loss particularly after viewing on TV, how NSA Babagana Monguno himself a one-time Guards commander confirmed his former unit’s minions were, “ambushed and decimated” within Abuja.

The same harvest of the grim reaper could be said on the recurring news of many of those carrying our nation’s flag in uniform including the Police and paramilitary personnel deployed all over the country to collectively secure us 24/7.

The loss of any one of you diminishes us as a nation.

My personal copy of the 9th edition of Oxford Advanced Learner’s Dictionary defines – decimate as, “to kill large numbers”

Monguno as the nation’s most senior securicrat cannot be said not to have chosen his words carefully. Understandably, some figures are patriotically best kept under wraps for official use only, to prevent widespread panic.

Brigade of Guards was established in September 1962 by Major-General Sir Christopher Welby-Everard, General Officer Commanding NA to provide VIP security in Lagos and perform ceremonial duties at the seat of power. Yet, on January 15 1966 there were only six policemen on guard at State House, Marina. Back then, Major Donatus Okafor was Guards commander.

The first group of soldiers to serve as Guardsmen were mainly drawn from a company seconded from the 1st Battalion at Enugu.

Since then, any officer who heads that elite unit must be a core loyalist committed to the regime protection of whoever is at the very top that appoints them.

The background of General Welby-Everard’s creation was the Treasonable Felony trial of Chief Obafemi Awolowo because the civilian attempt to topple the Balewa-led government was timed when 4 out of the 5 of our Army’s battalions spread in two brigades were actively engaged outside Nigeria on peacekeeping duties in Congo and the training of the Tanzanian Army. Somehow, the need to secure the seat of government was overlooked. The rest is now living history.

The center of gravity of any realm is its capital which in turn depends on outlying areas for support and stability.

That is why to defeat the Sokoto Caliphate the British had to start by capturing Ilorin in 1900, subsequently Bida in 1901, then Keffi, Zaria, and eventually Kano. By the time they reached Zaria in December of 1902, Emir Aliyu Babba had fled Kano and by the time they reached Kano in January 1903, Sultan Attahiru had fled Sokoto which was captured on March 15.

The Taliban in the recent past captured Kabul last within a couple of months. In fact, they just drove in to take control after President Ashraf Ghani fled. The same failure of intelligence that afflicted Sokoto in 1903 was what led to the downfall of Afghanistan in 2021.

Similarly, the ouster of President Omar al-Bashir of Sudan himself a retired General started at a bakery at Atbara some 300km from the capital Khartoum on December 19, 2018, over an increase in the price of wheat flour.

Bread in Sudan is referred to as “aysh”, Arabic for “life” so within weeks the uprising had reached Omdurman less than 30km to Khartoum. By April 11, 2019, President al-Bashir was unemployable to the good people of Sudan.

The current siege on Nigeria’s center of gravity has curiously followed the same trajectory in the foregoing patterns.

Has it been due to a well-contrived exit strategy for a deliberately messy and inclusive chaotic end or is it due to a gradual loss of grip through accumulated cluelessness?

Agreed, collateral damage is an extension of military life which is strictly hierarchical.

But the entire dynamic of different battlefields is controlled by Generals. They are trained to be anticipatory and proactive. Their scope is the widest. That is why when things fall apart, we know whom exactly to blame.

It could be recalled that on April 27, 2021, Governor Abubakar Sani Bello of Niger State had raised the alarm that Boko Haram terrorists had hoisted their flag in Kaure Village, in Shiroro Local Government Area of the state. He alleged that Boko Haram elements were trying to use the area as their home just as they did in Sambisa.

The unsettled governor then warned that ‘Kaure is just a two-hour drive from Abuja. So, nobody is safe anymore, not even those in Abuja.

He further alerted the federal government that: ‘This is the time to act. All hands must be on deck, it is not a fight for Niger State alone’.

Before Governor Bello’s warning, an internal memo dated September 4, 2020, was issued by the Comptroller in charge of Enforcement at the Nigeria Customs Service, H.A. Sabo on behalf of the Deputy Comptroller General, Enforcement, Investigation, and Inspection, stating that Boko Haram had established camps in and around Abuja FCT. Clearly, these could not have been tourism camps.

A copy of the intelligence report read: ‘Further reports have it that they are planning to attack some select targets within the territory. They are reported to have set up their camps in several identified enclaves'”

Ladies and gentlemen in (and out of) uniform – Thank you for your service.