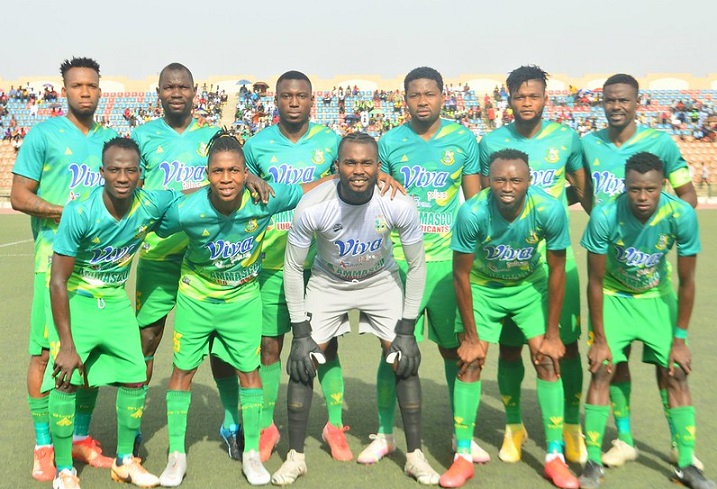 Kano Pillars football club forward GodsPower Tower put Sai Masu Gida ahead with a clinical shoot inside the box with an assist from Okon Aniekeme at fifteen minutes of play.

In the forty-five minutes of play which is about to round up the first half, GodsPower Tower increased the tally with a powerful heading after he intercepted a throwing from Ismaila Muhammad Nasir and make it 2-0.

The encounter went to the break 2-0 in favor of the Kano Pillars football club.

After the break, both sides come back for the second half with high spirits of winning the match and in the fifty-three minutes of play legend, Rabi’u Ali aka Pele scored the third goal for Pillars Fc with a shoot outside the box after receiving a pass from Okon Aniekeme.

Jerry Alex who came from the bench and replaced Ifeanyi Kelvin Eze scored the fourth goal with a heading after he capitalized on the defensive error of the Zamfara United Fc defenders in the corner kicked by Rabi’u Ali at an hour dot.

Captain Rabi’u Ali complete the Job with a five-goal at seventy minutes of play with a free kick twenty-five meters away from the box.

In his post-match conference, the Chief Coach of the Sai masu Gida, Coach Ibrahim A. Musa thanked God for the victory and commended the players for their commitments, and charged them to sustain the tempo and won the cup for the government and the good people of Kano state.

With this development, Kano Pillars football club has moved to round 16 of the competition, and now they are going to meet DMD football club of Maiduguri on Sunday 7/8/2022 in a venue to be decided by the Nigeria football federation anytime from now.

How Kano Claim Spending on Epidemic Preparedness, Investment Across PHCs Failed to Save Lives During Cholera Outbreak