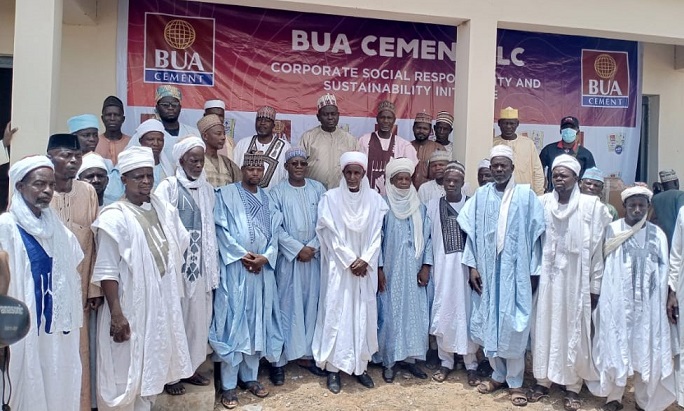 The projects that included Clinic, School, and daily Prayer Mosque were constructed and handed over to Gidan Boka Community as part of the Company’s Corporate Social Responsibility (CSR) to its host community.

The Managing Director of BUA Cement, Alhaji Yusuf Binji, handed over the completed projects alongside   170 tonnes of Cement to 68 communities in Wamakko LGA.

Binji represented by Director Human Resources, Alhaji Altine Wali, said the efforts were part of the company’s effort of enhancing its existing relationship with the host communities.

He said the efforts were part of the relocation of the settlements by the company, noting that the company cleared lands at new Gidan Boka to affected families.

Sada said the company ensured routine distribution of cement for communities to repair Mosques and other infrastructures as well as supply drugs and other consumables to citizens within the company’s host communities.

He added that BUA cement had been supporting communities in the areas of healthcare, skills training, provision of scholarships, and educational materials.

He commended the state and local governments, as well as the host communities, for the cordial relationship with the company, which facilitated its intervention in various communities.

According to him, the projects are to complement the efforts of the Sokoto State Government in providing good living conditions to the people.

Responding on behalf of the beneficiaries, the Chairman of Wamakko LGA, Alhaji Halliru Guiwa, represented by the Vice Chairman, Alhaji Garba Muhammad, thanked the company for the intervention.

Guiwa said that the residents were lucky to have the company in their domain, in view of its contribution to infrastructure development in the area.

He however appealed for more support in view of the population and the need of the residents.

Respective communities and received the cement allocations for their communities.