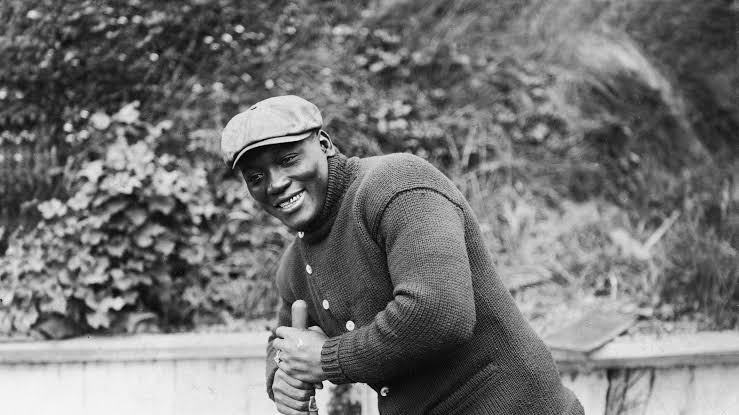 He is considered by many boxing observers to be one of the greatest heavyweights of all time.

Until his fight with Tommy Burns, racial discrimination had limited Johnson’s opportunities and purses. When he became champion, a hue and cry for a “Great White Hope” produced numerous opponents.

In 1910 by knocking out former champion James J. Jeffries, who had been induced to come out of retirement as a “Great White Hope.” The Johnson-Jeffries bout, which was billed as the “Fight of the Century,” led to nationwide celebrations by African Americans that were occasionally met by violence from whites, resulting in more than 20 deaths across the country.

He defended the championship three times in Paris before agreeing to fight Willard in Cuba. Some observers thought that Johnson, mistakenly believing that the charge against him would be dropped if he yielded the championship to a white man, deliberately lost to Willard.

At the height of his career, the outspoken Johnson was excoriated by the press for his flashy lifestyle and for having twice married white women.

Jack Johnson wins the “Battle of the Century” against James Jeffries on July 4, 1910, in Reno, Nevada. The fight between Johnson and Jeffries sparked a nationwide response, including both celebrations and riots. Johnson was the first African American Heavyweight Champion of the World and held the title until 1915.

From 1902-1907 Johnson won over 50 matches, some of them against other African-American boxers such as Joe Jeannette, Sam Langford, and Sam McVey.

Johnson’s career was legendary—in 47 years of fighting, he was only knocked out three times.

Johnson’s fighting style was very distinctive. He developed a more patient approach than was customary on that day: playing defensively, waiting for a mistake, and then capitalizing on it.

Johnson always began a bout cautiously, slowly building up over the rounds into a more aggressive fighter.

He often fought to punish his opponents rather than knock them out, endlessly avoiding their blows and striking with swift counters.

He often gave the impression of having much more to offer and, if pushed, he could punch quite powerfully.

In the years after Johnson’s death, his reputation was gradually rehabilitated. His criminal record came to be regarded as more a product of racially motivated acts than a reflection of actual wrongdoing, and members of the U.S. Congress—as well as others, notably actor Sylvester Stallone—attempted to secure for Johnson a posthumous presidential pardon, which is exceedingly rare.

After hearing about Johnson from Stallone, Pres. Donald Trump officially pardoned the boxer in 2018.