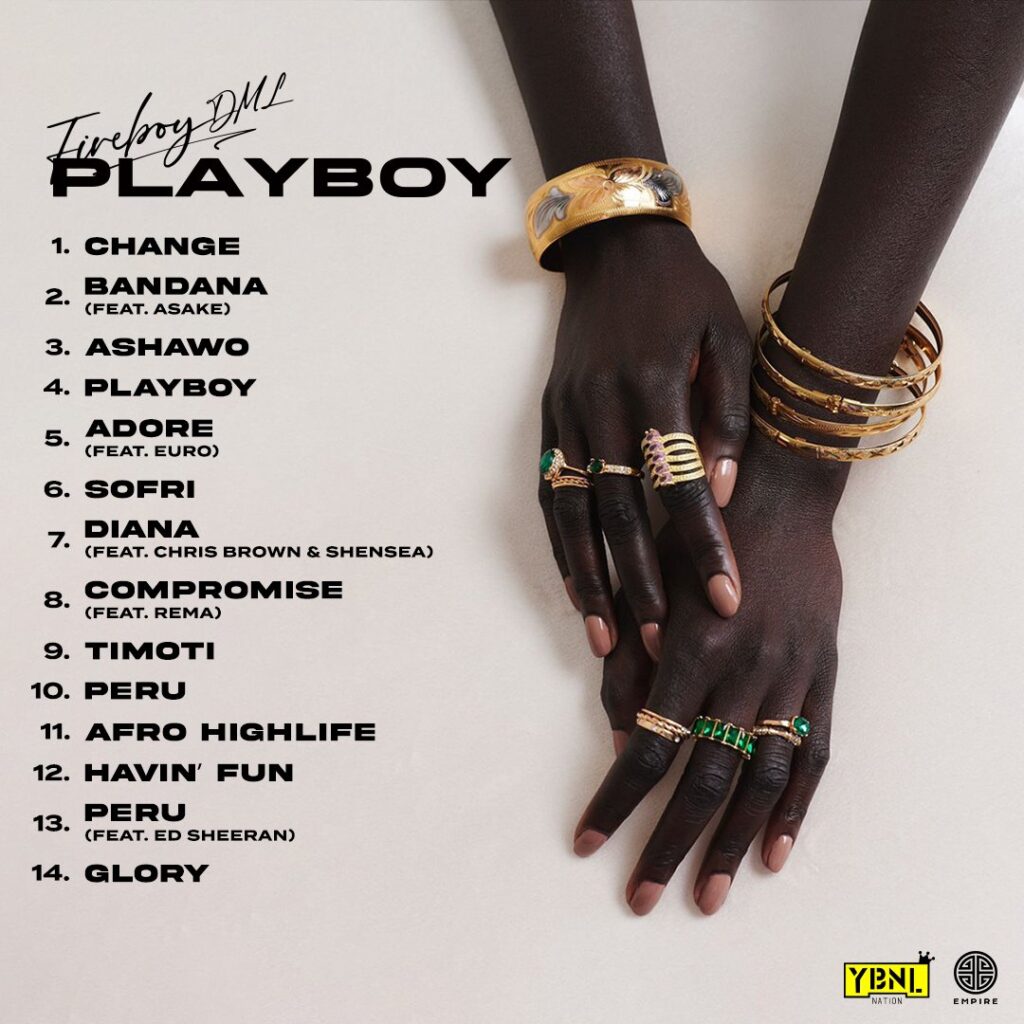 ‘Playboy’ will be Fireboy’s third album in four years and with this album, he will be looking to assert himself as an Afrobeats star with his eyes on the global stage.
This article examines five things to expect from the album judging from the songs released so far and the album track list.
Singles with International Appeal: Fireboy enjoyed international success with ‘Peru’ remix assisted by British heavyweight Ed Sheeran.
Haven scored a historic BET and Wembley performances, Listeners can expect that Fireboy will be hoping to consolidate on his international success with ‘Playboy’.

Fireboy is at a point in his career where he is perfectly positioned to make a move on the international market. This is evident in the choice of Chris Brown and Shensea.

Commercial Hits: Fireboy’s fame in Nigeria and Africa is driven by commercial hits and ‘Playboy’ will surely offer commercially appealing songs.
For one, his collaboration with Rema suggests an intention to score a massive commercial hit built on the profile of two Afrobeats superstars.

Grammy-worthy songs: Fireboy is one of Nigeria’s biggest export and with international success comes the desire to leave a global mark. The Grammys offer Fireboy the opportunity to become one of the greatest artists of Afrobeats’ modern generation and ‘Playboy’ could offer him a chance to test the waters.
Songs like ‘Change’, ‘Afro Highlife’, and ‘Glory’ might be an attempt to explore soundscapes that appeal to the Academy.

Huge Replay Value: Fireboy prides himself on his ability to make enjoyable projects after successfully putting out two commercial albums in two years. ‘Playboy’ is just 14 tracks which suggest that Fireboy might be looking to keep the album brief to increase it’s enjoy ability and its replay value.

Trifecta: Fireboy has released two albums that critics consider to be classics and he will be hoping to achieve a trifecta with ‘Playboy’.

When is ‘Playboy’ dropping?: Fireboy is set to release ‘Playboy’ on August 5th, 2022. The album will be his third album in four years after releasing ‘Laughter, Tears, and Goosebumps’ in 2019 and ‘Apollo’ in 2020.
(Pulse)