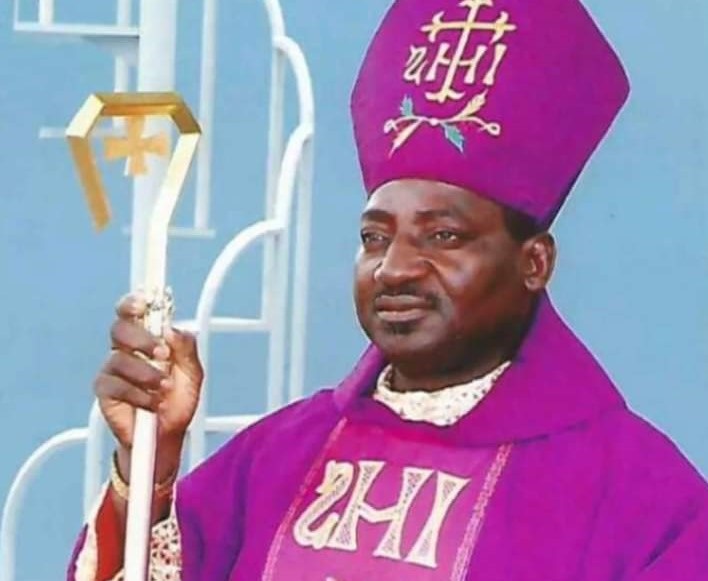 People call him by as different names as their perception of his personality enables them.

While some refer to him as the ‘Good Shepherd’, others name him the ‘Silent Achiever’. There are those that love to call him the ‘Uncommon Bishop’, and yet some others see him as the ‘Man of the People’.

This is the revered Dr. George Jonathan Dodo, the pioneer Catholic Bishop of Zaria Diocese, who died on 8th July 2022 after a brief illness that took him to India for better medical management.

Incidentally, Bishop George died just 6 days after the demise of his father Pa David B. Dodo.

While their father was buried on 19th July 2022 in his home town Zuturung Mago in Southern Kaduna, his son will be buried in Zaria after a funeral Mass at St. Joseph’s Minor Seminary – his Alma Mater on 4th August 2022.

Eternal rest grant unto them O’ Lord, and let perpetual light shine upon them.

George was born on 17th April, 1956 to Mr. David B. Dodo and Mrs. Paulina A. Dodo at Zuturung Mago in Southern Kaduna.

As the second child and the first son of his parents, George received the best care any child could.

Talking to one of his village age and playmates who happen to also be a second child and first son (wish to remain anonymous), yours sincerely was made to understand that George also had his share of a spanking usually meted out to first sons of those times in order to prepare them for responsibility in the family.

This was quickly backed up with words of admonition and encouragement from his disciplinarian and loving father, who abhorred traits of, an unnecessary display of youthful exuberance.

These disciplinary measures not only served as a deterrent but quickly helped in transforming George into a disciplined, humble, foresighted, and hard-working young boy.

Little wonder George was easily identified by the headmaster who made him the school’s timekeeper in his St. Patrick’s Primary School Zuturung Mago where he graduated in 1970.

Reminiscent of youth’s thirst for knowledge, George proceeded to St. Joseph’s Minor Seminary Zaria where he graduated in 1977 with GCE.

His love for the priesthood endeared George to immediately enroll into the prestigious St. Augustine’s Major Seminary Jos same 1977 where he studied Philosophy and Theology.

By dint of hard work, dedication, and discipline, George, even as a student served/worked in the School Library of the Major Seminary Jos.

By 1981, George had bagged a Diploma in Religious Studies from the premiere University Ibadan, and shortly after, a Bachelor of Arts Degree in Sacred Theology from the Pontifical Urbanian University of Rome.

Still, in the quest for knowledge, George went for further studies at the Jesuits of Ruse Hill campus of the Fordham University New York USA where he obtained 2 Masters of Arts Degree in Pastoral Care/Counselling, and an Advanced Professional Diploma that was upgraded to a Doctorate.

George Jonathan Dodo was ordained a Deacon in the Archdiocese of Jos in 1983 and thereafter raised to the Order of the Presbyterate in June 1983 at St. Joseph’s Catholic Cathedral Kaduna as a priest of the diocese of Kaduna.

On 3rd March 2001, Monsignor George Jonathan Dodo was consecrated as the pioneer bishop of Zaria Diocese, the diocese he nurtured, cherished, and today has bequeathed to this generation, and generations yet unborn.

Everywhere he was posted to and everywhere he went, Rev. Fr. George Jonathan Dodo was known to leave the place better than how he met it. He touched lives whenever and wherever. He left his marks of indelible legacies on the sands of time.

After his ordination as a priest of the diocese of Kaduna on 18/6/1983 at the age of 27, the first place of pastoral assignment for Rev. Fr. George Dodo was the Cathedral of St. Joseph’s in Kaduna as the Assistant Cathedral Administrator between July 1983 and June 1984.

He also served in the following parishes:

On the historic Erection of the Catholic Diocese of Zaria and the Episcopal Ordination, Monsignor George Jonathan Dodo was Consecrated as the Pioneer Bishop of Zaria on 3rd March, 2001. Bishop Dodo immediately went to work to uplift the new diocese to great heights.

Interestingly, this workaholic of a George was already an embodiment of an insatiable appetite for the spiritual upliftment of humanity, human resources development, capital growth, and investment, and project management and execution.

Therefore, the following is a testimony to his doggedness for positive achievement:

(1) Rise in population of Laity, parishes, clergy, and religious:

a) At inception of the Diocese in March 2001, Bishop Dodo inherited a total Catholic population of 64,941 thousand, 19 priests, and 10 parishes.

d) In 2010 when Zaria marked 10 years anniversary, the Catholic population went up to over 71,336 thousand, 26 priests, 19 parishes, 5 females religious, and many Catechists.

The Diocese inherited in 2001 only one school – the St. Joseph’s Minor Seminary, but as of today, there are over 14 nursery/primary schools, 5 secondary schools, and 2 hospitals.

It is interesting to note that the upgrading of the Pope John Paul II School of Evangelization to a diploma-awarding Institution is receiving favorable attention from the appropriate quarters.

The Our Lady of Perpetual Help Pastoral Center Graceland Zaria is a complex occupying a fairly large expanse of land. This center which is a pride to the diocese has in it :

# Rice milling factory fitted with some of the modern machines.

# Animal farm with cattle, fishes, and other animals.

# Accommodation facility that competes favourably with others in the hospitality industry in Zaria.

The ‘OliveBranch’ newspaper is a monthly publication by the diocese that had won the best place prize award among all Catholic Newspapers in the country.

There are over 20 functional Pious Associations and Societies including the Knights of the Church, Sacred Heart of Jesus and Immaculate Heart of Mary, Catholic Women Organization/Zumunta Mata, St. Jude Igbo, just to mention a few.

All the foregoing are indicative of Bishop Dodo’s effective leadership, management, and spirit of teamwork which came with a lot of social influences thus maximizing the efforts of others for greater achievement, and the common good.

At the time of his death, he was serving as a member of the Mission and Inter-Religious Dialogue Department of the Catholic Bishops Conference of Nigeria (CBCN).

He was a member of so many bodies both national and international.

During one of Bishop Dodo’s last public functions in Zaria – ie the convocation of World Catholic Church Synod on 26/3/2022, yours sincerely as one of the three paper presenters at the synod reminded His Lordship of

(2) his attainment of 20 years as Bishop of Zaria, with a request and the need for him to celebrate these landmarks achievements for the Laity of the diocese.

In response, the bishop replied that the laity should rather celebrate him for his steadfastness as their Good Shepherd.

Little did we realize that Bishop Dodo’s prophetic words were to prepare Zaria for this celebration of his Call to Glory.

George is indeed celebrated in death.

He was a dedicated workaholic, humble, unassuming, a simple but firm administrator, and the pioneer bishop of Zaria Diocese from 3rd March 2001 – 8th July 2022.

George nurtured a legacy, he cherished that legacy and bequeathed this most prized legacy to not only Zaria but the entire Catholic Church.

He will be buried in Zaria after a funeral Mass at St. Joseph’s Minor Seminary – his Alma Mater on 4th August 2022

Eternal rest grant unto him O’ Lord and let perpetual light shine upon him.