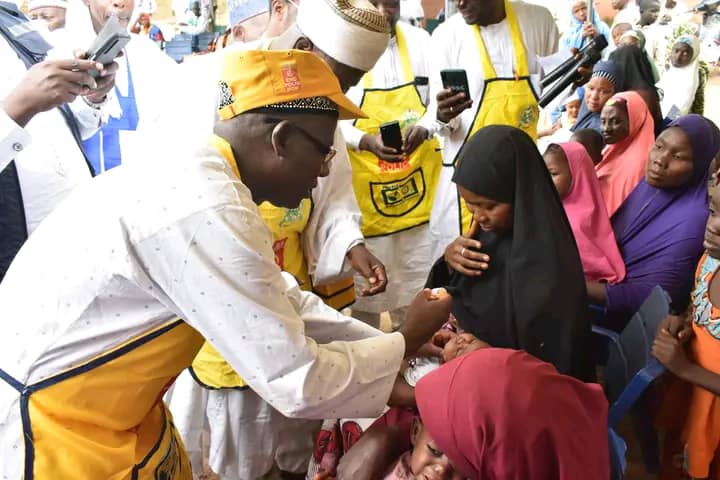 The Executive Chairman of SPHCDA, Dr. Rilwanu Mohammed said in an effort to address challenges of maternal deaths in children, Bauchi State Government has within the week launches the July 2022 OBR for oral polio vaccination campaign targeting 2.286 million under 5 years children across the state.

The event was held at Unguwa Galadima Tirwun village, in Bauchi.

The Information Officer PHCDA Bauchi, Ibrahim Sani, in a statement on Sunday said that the Chairman SPHCDA Dr. Mohammed revealed that a total of 2,367,450 nopv2 vaccines have been received by his Agency for the July campaign.

According to the statement, the vaccination campaign will hold in 323 wards, and 17,243 settlements across the 20 LGAs of the state, while 4023 house-to-house vaccination teams are expected to cover the exercise in the state.

The Chairman further explained that there will be a total of 1280 special teams with 647 fixed teams just as the total number of DOPV teams is 756 while the campaign will last for 4 days, 30th July to 2nd August.

Dr. Mohammed however disclosed that logistics have been paid by WHO and UNICEF while there will be the implementation of the DOPV strategy in 13 high-risk LGAs with the deployment of 400 supervisors which includes national, state and LGAs.

The SPHCDA Boss also said that routine immunization (RI) will be intensified in the affected settlements with circulating virus while plans have been put in place to conduct regular evening review meetings at the ward, LGA, and state.

He then appealed to the executive chairmen of the 20 LGAs to attend the review meetings in order to be kept abreast with the campaign.

Earlier, while giving the update on the exercise, the Incidence Manager, Polio Emergency Operation Centre Bauchi, Dr Salisu Idris Isah, said before the state-wide exercise, there was state-level training for state technical facilitators while advocacy visits were paid to political, religious, and traditional leaders in order to get a successful campaign.

“In the LGAs, a ward-level training of house-to-house teams and special teams were done, just as TFI and social mobilization committee meetings were conducted at the various LGAs to review the last round of the campaign, examine its successes, challenges and provide action points”.

In his remarks, Executive Chairman, Bauchi LGC, Alhaji Mahmoud Babama’aji said that his council has trained 1623 personnel for the campaign who will be deployed to all the wards in the area.

He assured that the council will continue to be very active in providing quality healthcare services to the people stressing that the oral polio campaign will be a huge success in the area as people have been adequately mobilized.

The flag-off campaign was attended by principal Officers from SPHCDA, representatives of various health organizations such as WHO and African Field Networks Epidemiology, Tirwun Village Head, and Ward Head of Unguwan Galadima as well as caregivers.