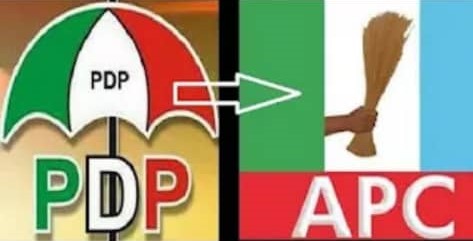 Defection rocks the People’s Democratic party, PDP, in Shanga local government area of Kebbi state where the entire party Exco, and members of the party defected to the All-Progressive Congress APC.

Speaking at the occasion, the leader of the decampees, Alhaji Yakubu Dala Shanga who was before his defection the Shanga local government PDP Chairman, announced his defection alongside his entire executive members across the ten wards.

He told the gathering that “I contributed immensely in building the PDP right from inception in 1999, but today honestly, I have to tell you that I’m left with no option but to dump the party for lack of justice, equity, fairness, and wisdom” he said.

“According to him, he lamented that the PDP, especially in Kebbi state is a sinking ship.”

He, therefore, assured that he will do all his best to work for his new party APC come 2023.

Receiving the defectors, The state party chairman of APC. Alhaji Kana Zuru alongside a Party Chieftain double as a Personal Assistance to Governor Atiku A Bagudu, Alhaji FFarukMusa (Jagaban Gwandu) in their separate remarks welcome the new members and assured them of fairness, justice, and equity in their new party, APC.

He said “In APC both new and old members are treated equally, he, therefore, called on the new members to register with the party.

Faruk further predicted the party’s success in the forthcoming 2023 general elections and urged members to work assiduously towards the success of each and every candidate of APC he, therefore, urged members to collect their PVC.

The highlights of the occasion were the registration of the new members and cards of the party issued to them in accordance with the APC constitution.