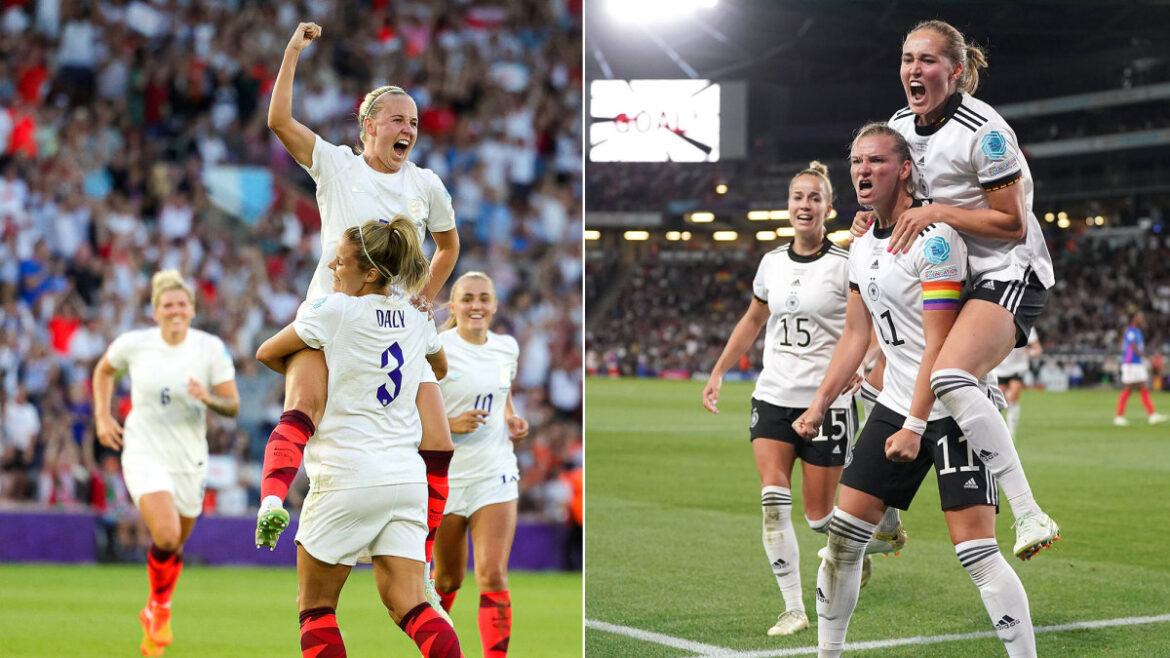 England’s Lionesses stand on the brink of women’s football history as they take on Germany in the European Championship final at Wembley on Sunday.

Victory would be both the first major trophy for the England women’s team and the first football honor for the nation since the men’s 1966 World Cup win.

As well as making the team household names, a victory is also predicted to catapult women’s football in England to new heights.

But standing in the way again are Germany, who have won the competition eight times. They beat England 6-2 in the final of Euro 2009, the last time they played each other at the tournament.

There is coverage across BBC television, radio and online, with millions expected to watch the match on the BBC.

The semi-final attracted a peak TV audience of 9.3m. England’s World Cup semi-final against the USA in 2019 holds the UK record for women’s football with 11.7m watching on the BBC.

Both teams have been the standout sides in the tournament, each conceding just one goal, and have shown their class to reach the showpiece at Wembley.

The Lionesses justified their status as one of the pre-tournament favourites with a 4-0 semi-final thrashing of Sweden, ranked second in the world, while Germany, who came into the Euros as a bit of an unknown quantity, edged past France 2-1.

What’s England’s record like against Germany?
Not great, but then we described their record against Sweden as “shocking” and things didn’t go too badly in the semi-final.

But England will have to rewrite the record books once more if they are to triumph in the capital.

They have won just two of 27 meetings against Germany – though one of those came in their most recent meeting, in February.

England have lost more games (21) against the Germans than any other side, while they have been on the losing end in all four meetings at previous European Championships.

“These are the games you live for,” said England captain Leah Williamson.

“It’s a fairy-tale fixture with the history behind it. I think we have the two teams who have had the best tournaments in the final.

“Nobody ever has a home game where they don’t have an advantage. This is our national stadium so it’s familiar to us and the support we have had so far has been incredible. It’s an exciting thought that we have that on our side.”

Data analysts Nielsen Gracenote give England a 52% chance of success because of home advantage, saying Germany would have a 55% chance of winning at a neutral ground.

However, Germany are used to spoiling England’s party in the women’s and men’s games.

Manager Martina Voss-Tecklenburg said: “In the beginning, Wembley will be English and I hope it will belong to us at the end.

“We want to play our game, be courageous, aggressive, give it our all, play as a team. This has worked well so far.”

England boss Wiegman’s record is formidable, winning all 11 games she has taken charge of at the Euros. She led the Netherlands to an unlikely triumph on home soil five years ago.

She is looking to repeat the feat with England on this occasion, in turn becoming the first coach to win the tournament with two different teams.
Wiegman’s record since taking charge of England is a near-flawless one too, unbeaten in her 19 games, drawing just two of those.

On the other hand, Germany coach Voss-Tecklenburg will become just the second woman, after former team-mate Silvia Neid, to win the competition as both a player and coach.

Having won the 2009 Champions League with Duisburg, she is also aiming to become the first coach to win Europe’s top club and national team competitions.

Golden Boot up for grabs
It’s not just the champions of Europe who will be decided on Sunday. So too will the winner of the Golden Boot, with two front players going head-to-head for the award.

England forward Beth Mead and veteran Germany striker Alexandra Popp have led the way in front of goal, both scoring six from their five matches so far.

Mead netted an unforgettable hat-trick in the 8-0 thrashing of Norway, while Popp has set the record of becoming the first player to score in five consecutive Euros games.

The Wolfsburg striker is looking to become just the second player, after Frenchman Michel Platini in 1984, to score in every match at a European Championship.

Arsenal’s Mead is aiming to match Alan Shearer’s England record of seven goals scored in a single Euros tournament from 1996.

If both players end on the same number of goals, it will go down to assists and Mead edges ahead on that front as it stands, laying on four goals for her team-mates.

Legacy of the tournament
These Euros have smashed every attendance record going.

Before the final, the total tournament attendance of 487,683 is more than the previous record for a European Women’s Championship. In fact, the previous landmark of 240,055 was passed in the group stages.

The final is likely to go even further and take the record for the men’s or women’s Euros. The men’s 1964 final between Spain and the Soviet Union was watched by 79,115 at the Bernabeu. Last year’s Euro 2020 final between England men and Italy was restricted to 67,173 amid Covid restrictions.

Both the success of the tournament itself and of England is partially down to increased investment by the Football Association and into the Women’s Super League in previous years.

“Whatever happens in the final, if girls aren’t allowed to play football in PE like the boys what are we doing?” asked Ian Wright after the semi-final win.

“This will inspire a lot of people. If there’s no legacy after this like with the Olympics what are we doing? Girls should be able to play.”

The FA’s aim, in its Euro 2022 legacy report, is for 75% of schools to provide equal access for girls to play football within PE lessons by 2024. Only 63% of girls have the same access as boys to football currently.

On the success of the tournament, she said: “I hope it’s spreading some really wonderful feelings of hope and happiness to the whole nation.

“Legacy actually starts before a tournament. I think most people think it’s something that happens after a tournament, but we’ve been working on very good legacy plans.”

Karen Bardsley was on the bench last time England reached a major final in Euro 2009, when they lost 6-2 to Germany.

Yul Edochie Warns ‘Boys No near My House’ As He Flaunts 17-Yr-Old Daughter, Danielle