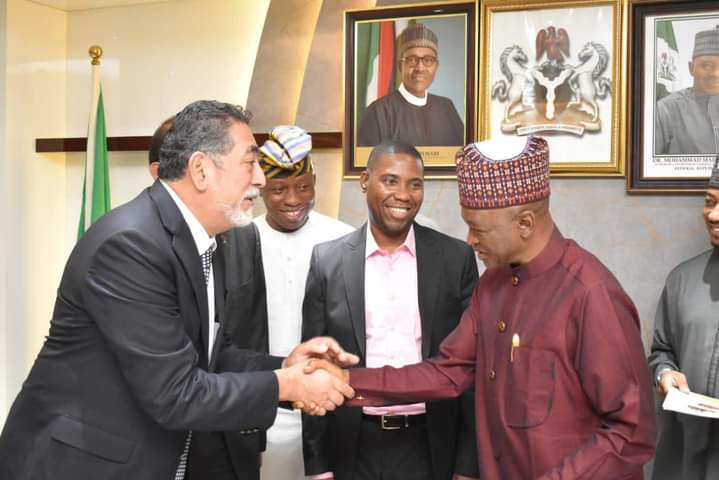 The Minister of Agriculture and Rural Development, Dr. Mohammad Mahmood Abubakar has said that the Federal Government would revive economic ties with Mexico stating that it will lead to robust diplomatic relationship, strategic trading as well as rewarding traffic for trade.

The Minister made this known recently when he received the delegation led by the Mexican Ambassador to Nigeria, His Excellency, Mr. Alfredo Miranda in his office in Abuja.

The Information Officer II, Mohammed Abdullahi Gana, in a statement made available to newsmen on Friday said Dr Mohammad Abubakar said that Mexico is not just another country that Nigeria has good diplomatic relations with, but also a strategic trading partner and the biggest importer of the country’s hibiscus.

According to the statement, the Minister recalled that ‘’ in 2017, Nigeria earned $35m from export of 1,983 containers of hibiscus to Mexico, this happened within the space of nine months of that year’’.

Abubakar pointed out that “it is regrettable that the suspension of hibiscus trade lasted for nearly three years longer than it should and resulted in a slowdown of the momentum of export activities around hibiscus”.

He further revealed that period was used to decisively overcome the proximate cause of the suspension of export, ‘’ the days of khapra beetle infestation of some of the hibiscus consignments are behind us’’

Abubakar pledged that the ministry would work closely with off takers and exporters through the Nigeria Agricultural Quarantine Service (NAQS) to facilitate the building of chambers dedicated to methyl bromide fumigation of hibiscus.

The Minister commended the Ambassador for his efforts towards ensuring that the compliance issue that stalled the export of Nigeria hibiscus to Mexico was resolved during his tenure.

Dr Abubakar informed his audience that ‘’ Nigeria is a large producer of Ginger, Chili Peppers and various, we will love to be Mexico’s importer of choice for these products, our hope is that you will support NAQS to achieve this mutually beneficial outcome’’.

In his remarks, the Mexican Ambassador to Nigeria, Mr. Alfredo Miranda said that his country is deeply involved in strengthening the capacity of the agricultural produced, adding that hibiscus value was worth more than 600 million dollars, he expresses his delight to do business with the country under the Ministry.