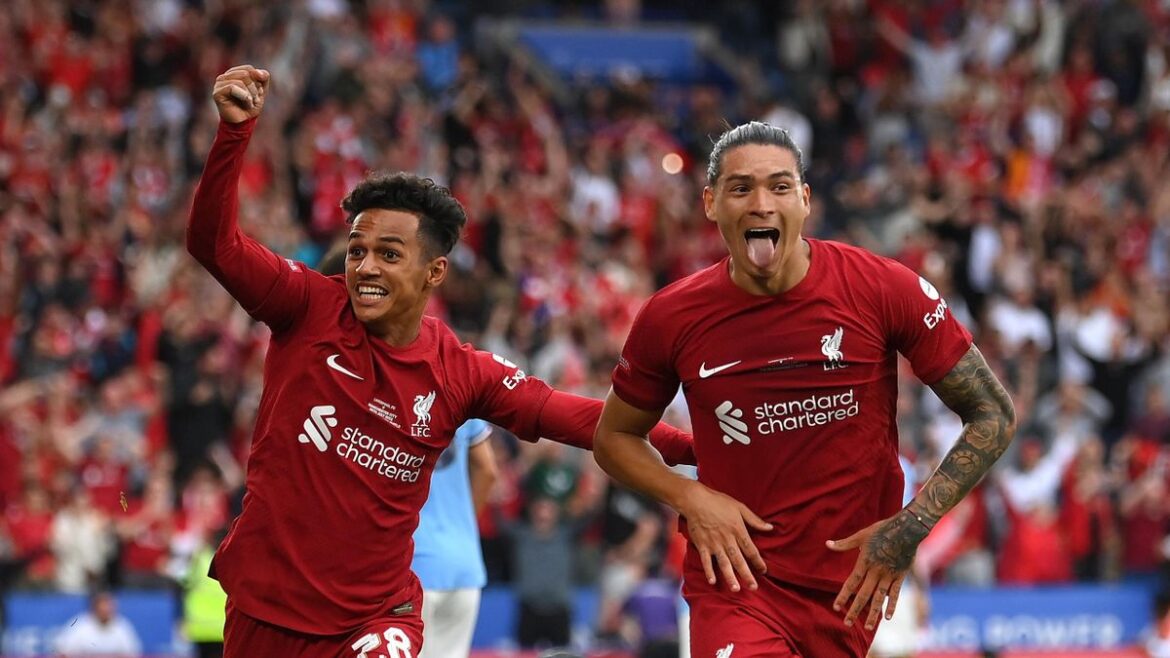 The FA Cup winners were pipped to the Premier League title by a single point last term after a season-long fight with City, but came out on top in a tremendous game in Leicester.

Playing at the King Power Stadium rather than Wembley – which will host Sunday’s Women’s Euros final – the two sides did not hold back in a match that tends to be badged as a ‘glorified friendly’.

Reds full-back Trent Alexander-Arnold scored the opening goal with a curling effort from the edge of the box which took a slight deflection off Nathan Ake and nestled in the far corner.

He celebrated by raising his finger to his lips in front of the City supporters, who had helped generate a thunderous atmosphere by trading jibes with their Liverpool counterparts.

City’s star summer signing Erling Haaland showed glimpses of what he will bring by drawing a good save from Adrian, while Nunez had a one-on-one effort kept out by Ederson.

But it was another newcomer – Julian Alvarez – who scored next, staying alert after Phil Foden’s shot was saved to poke home the equaliser from close range, with the goal awarded after a lengthy VAR check.

Mohamed Salah edged Liverpool back in front by scoring from the penalty spot with eight minutes remaining after referee Craig Pawson adjudged – from looking at the pitch side monitor – that Ruben Dias had handled inside the area.

And Nunez had the final say, stooping to head in from close range before wheeling off to celebrate in front of his new supporters.

Nunez makes his mark
Liverpool came agonizingly close to a quadruple last season as they won the Carabao Cup and FA Cup, but they missed out on the league by the narrowest of margins and were defeated in the Champions League final by Real Madrid.

Just 63 days on from that loss in Paris, the Reds were back in action against the side they have formed an intense but respectful rivalry against over the past four years.

Liverpool came out flying in trademark fashion from kick-off, hassling and harrying the City backline, and Salah – fresh from signing a bumper new contract in the summer – struck the side-netting in just the third minute.

Andrew Robertson headed into the side-netting too, before fellow full-back Alexander-Arnold broke the deadlock with a curling effort, albeit via a nick off Ake’s head.

It sparked jubilant scenes in the red end of the ground, where the Liverpool fans lit flares and filled the stadium with smoke, just as they had done at Wembley after their FA Cup triumph over Chelsea in May.

Nunez has been brought in from Benfica to replace Sadio Mane, who joined Bayern Munich, and the Uruguay international was brought on just before the hour mark.

He almost made the perfect start to his Liverpool career when latching on to Jordan Henderson’s perfectly weighted through ball only to strike his shot straight at the advancing Ederson.

But he was involved for Salah’s goal as his header struck Dias’ arm inside the box, and the Egyptian stepped up to net the penalty.

There was still time for Nunez to head home late on, as the £64m man sealed victory to complete the domestic trophy set for manager Klopp.

Haaland draws a blank
City have won four of the past five Premier League titles and are looking to become just the second side after Manchester United to lift the trophy in three successive seasons.

The City fans were not shy of reminding their Liverpool counterparts, their chants of “You nearly won the league” prompting a riposte of “Where’s your European Cup?”

Pep Guardiola’s men went into the closing weeks of the season aiming for a Treble of their own, but their hopes were dashed by semi-final defeats in the FA Cup by Liverpool, and in the Champions League by Real Madrid.

The £51m acquisition of Norway international Haaland from Borussia Dortmund gives them a different dimension up front, following the departures of Gabriel Jesus and Raheem Sterling.

Haaland outmuscled Robertson in the first half, taking the ball down on his chest only for his side-footed shot to be batted away by Adrian, then he could not get enough connection on a stretching effort.

Argentina international Alvarez, who signed in January but stayed with River Plate until the end of their season, did level after coming on, to highlight the options Guardiola has at his disposal.

But the joy was short-lived as Salah and Nunez both scored, before Haaland missed a sitter from a couple of yards out in the final minute.
(BBC)