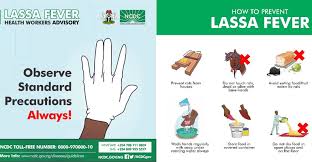 The Nigeria Centre for Disease Control has urged Nigerians to continue taking precautions to prevent getting infected with Lassa fever, warning that the health condition still poses a major public health challenge in the country.

Lassa fever is an acute viral illness and a viral haemorrhagic fever. This zoonotic disease is associated with high morbidity and mortality which has both economic and health security consequences.

This caution comes as the NCDC reports 10 new cases of Lassa fever infections including that of a health worker and two deaths in the latest situation report for week 29.

The NCDC disclosed this on its official Facebook page while releasing the latest situation report for week 29 which ran from the 18th to the 24th of July.

According to the epidemiological report, more cases of Lassa fever have so far been confirmed this year than were recorded in 2021.

Also, this year 164 casualties have been reported while 79 were recorded in the past year.

“These were reported from Edo and Ondo States. Cumulatively from week 1 to week 29, 2022, 164 deaths have been reported with a case fatality rate of 19.1 percent which is lower than the CFR for the same period in 2021.

“In total for 2022, 24 states have recorded at least one confirmed case across 99 Local Government Areas.

“Of all confirmed cases, 70 percent are from Ondo, Edo, and Bauchi States.

“The predominant age group affected is 21-30 years,” the NCDC said.