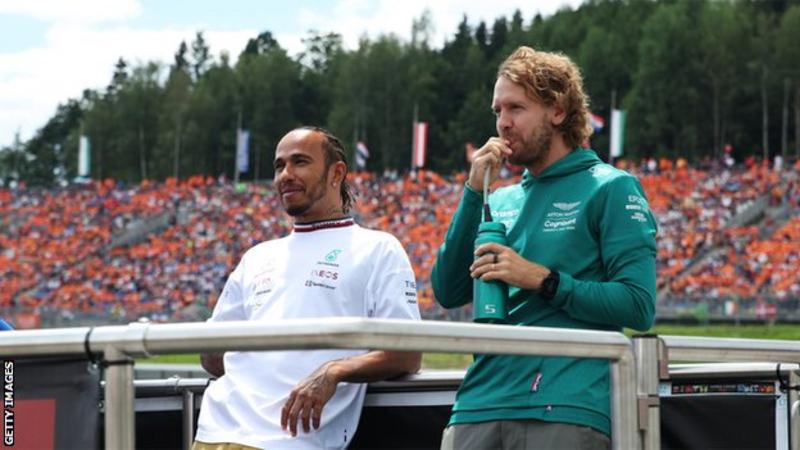 Fellow multiple world champions Lewis Hamilton and Fernando Alonso have paid tribute to Sebastian Vettel after he announced his retirement.

The four-time champion said on Thursday that he would step away from F1 at the end of this season.

Hamilton and Alonso, whose careers have paralleled Vettel’s, both described him as “a legend of our sport”.

And Hamilton praised Vettel’s move towards activism, especially on the climate crisis, in recent years.
Hamilton said: “I am sad to hear he’s leaving. I think he is one of the most impactful F1 drivers who has ever lived and I feel very proud to have been here in the time he was.

“He is the most conscious – I like to think I am up there with him, in terms of conscious of the impact we’re having and what we can do with our platform.

“He has been such a great voice and I am really proud of him for that.”

“Leaving this sport better than you found it is always the goal. I have no doubt that whatever comes next for you will be exciting, meaningful, and rewarding. Love you, man.”

Alonso, who famously lost out in two close title battles with Vettel in 2010 and 2012 when the Spaniard was at Ferrari and the German at Red Bull, said: “Four titles and not only [a legend] as a driver, as a human being.

“He has very strong values and a very correct way of thinking. We will miss him. I will miss the battles on track.

“Our careers were very close together always, together with Lewis. We miss one of the three. But family and other things are probably in this decision so I wish him the best and a lot of happiness.”
Vettel said he had not decided what to do next, but made it clear that spending time with his family, and his concern for the environment were at the center of his move.

“Unfortunately, I wish it wasn’t like that, but the climate crisis is part of all our futures,” Vettel said.

“Nobody is able to run away from it. We all have to face it and it will face us all. It’s also one of the bigger aspects that have led to the decision, the changing world and there are aspects of the job today, flying around the world, burning fuel that don’t feel right.

“Once you see the whole picture, it is hard to un-see. It is the biggest challenge waiting for all of us.”

Hamilton and Alonso’s comments were echoed by drivers up and down the grid.

World champion Max Verstappen said: “He is a great ambassador for the sport and has achieved so much. He worked hard for that.”

Ferrari’s Carlos Sainz added: “He’s a great role model, and an ambassador for the sport, but also the younger generation coming through.

“Everyone in the paddock loves him. You will not hear someone speaking bad about Seb, and this speaks to his personality and his life as a human being.

“We will miss him but I hope we will see him again in the paddock helping in some of the areas he has been very vocal about recently.”
(BBC)