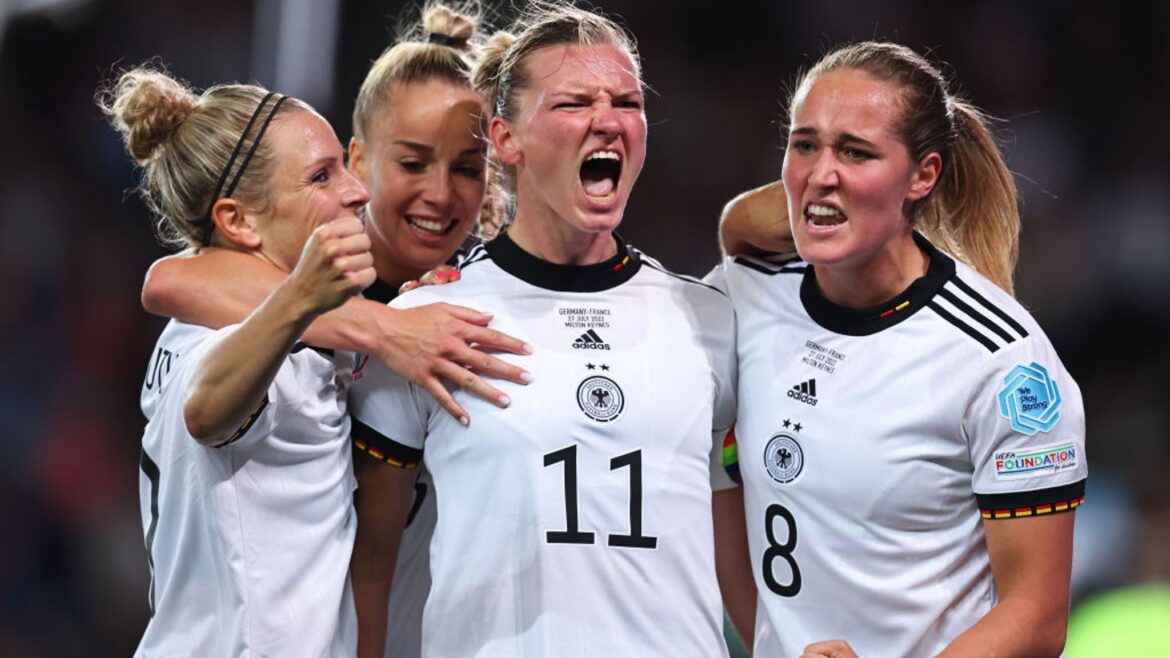 Eight-time European champions Germany will play England in the Euro 2022 final at Wembley on Sunday after they beat France in a dramatic semi-final in Milton Keynes.

After a quiet opening 40 minutes, Alexandra Popp put Germany ahead with a volley from Svenja Huth’s cross from the right side of the penalty area for her fifth goal in five games.

However, their lead only lasted four minutes before Kadidiatou Diani broke free and shot from outside the penalty area, with her effort hitting the post and bouncing in off unfortunate goalkeeper Merle Frohms.

The Germany goalkeeper made three vital saves to keep it at 1-1 before Popp headed in her sixth goal of the tournament, taking her level with England’s Beth Mead as joint leading scorer, for what proved to be the winner.

Sunday’s final takes place at a sold out Wembley, which will have a capacity of 87,200, and the match could set a new attendance record for a match in a European Championship, either male or female.

England, looking to win the tournament for the first time, thrashed Sweden, the highest-ranked European side, 4-0 at Sheffield United’s Bramall Lane on Tuesday.
Germany stay on course for ninth title, more heartbreak for France
There had been fears that the national rail strike, which saw a reduced service at Milton Keynes Central and with no trains after 18:30 BST, would severely affect the attendance at Stadium MK.

But that was not the case as a crowd of 27,445 – the ninth highest in the history of the tournament – produced a great atmosphere for the match between two of the top five ranked teams in the world.

However, both sides struggled to create chances in the opening 40 minutes, with Popp’s 25-yard free-kick that was pushed wide by France goalkeeper Pauline Peyraud-Magnin the only notable effort.

That changed when Popp became the first player in the competition to ever score in five consecutive games, continuing a remarkable tournament for the Wolfsburg striker, who returned to action in March after 10 months out because of a serious knee injury.

Before that goal the crowd had produced a Mexican Wave, generally seen as a sign that things could be better on the pitch, but that Popp volley, in which she showed great technique, sparked the game into life.

Four minutes later Diani was instrumental in the equaliser as her shot struck the post, hit the back of Frohms and went into the net for the first goal Germany have conceded in their fifth match of the tournament.

But France, playing in their first European semi-final, had three chances in a three-minute spell midway through the second half as they pushed to take the lead.

First off, Diani did excellently to get to the byeline, and her pullback found substitute Selma Bacha, who spun and shot but saw it parried by Frohms.

Then from the resulting corner, France captain Wendie Renard nearly got her first goal of the tournament, rising superbly at the back post and heading at goal, only for Frohms to save it with her legs.

Frohms then saved again from Diani and for a rare moment in this tournament, Germany were looking vulnerable.

But, just when they needed inspiration, it came from captain Popp as she powered a header into the net from another Huth pass as her side retook the lead.

France, who also lost in the semi-finals of both the 2011 World Cup and 2012 London Olympics, pushed forwards in search of an equaliser that would have taken it to extra time.

But they could not level for a second time as Germany held on to set up a Wembley showdown with Sarina Wiegman’s England on Sunday.

‘Super-exciting and super-exhausting’
Germany coach Martina Voss-Tecklenburg: “I feel pure pride for this achievement and these players from numbers one to 23.

“We have worked so hard and have become such a tight-knit bunch who support each other on the field. We totally deserved to win.

“France made a change for the second half after only having one shot on goal before the break. We knew that they could do more offensively and hurt us.

“It was a terrific team effort to [contain them]; that’s what we wanted. It worked out in the end but it was super-exciting and super-exhausting.”

France boss Corinne Diacre: “We saw that some of the French players were not on par with their normal level of fitness but we didn’t give up or throw in the towel.

“Maybe if we had an extra 48 hours [to rest] the game would’ve been different but I don’t think we should take this win away from Germany.

“We came up against a very strong and beautifully athletic team. The disappointment is quite heavy in the air right now and we need to stick together.

“Obviously disappointment is the overriding feeling right now because we have lost this match, but we have got foundations to build on and we just need a bit of time.

“This was not our night, maybe it was just not our competition this year.”

‘Winner’ Popp and Wembley goosebumps – Pundit reaction
Former England midfielder Fara Williams, on BBC One: “Germany have had a fantastic tournament, only conceding one goal all the way to the final.

“They have been in transition for a few years now, and they seem to be the Germany of old. They came into the tournament unknown but now we know who they are.

“Alex Popp was waiting for her moment in this tournament. She wasn’t even in the starting 11 in the opening game.

“It came down to an injury and a substitution. She came on, scored that third goal and took her chance. That is what players that are hungry do, that is what winners do and Popp is a winner.”

Former England defender Stephen Warnock, on BBC Radio 5 Live: “It was a really good game, especially in the middle of the park. We’ve seen moments of quality like the Germany goals.

“England are going to have outwork Germany. Seeing this Germany team live, they are relentless in the way they attack. They are such a difficult proposition to come up against.”

Ex-England defender Alex Scott, on BBC One: “Everyone was talking today and saying ‘imagine if it is an England v Germany final at Wembley?’ Well, it is happening. The hype is beginning.

“I am getting my goosebumps back thinking about what the atmosphere is going to be like on Sunday.”
(BBC)