Menu
Home Opinion BKO, where are our Super Tucanos?
Opinion

BKO, where are our Super Tucanos? 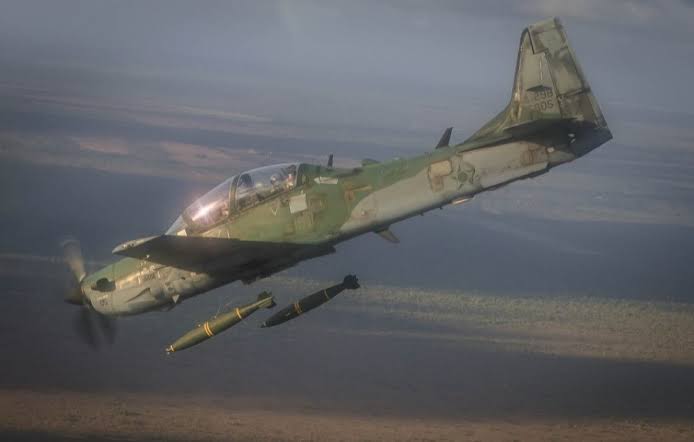 Exactly a year ago in August 2021, Babajide Kolade-Ojitoju was his usual ebullient self as the encyclopedic in-house analyst on the flagship then must watch, ‘Journalists Hangout’.

As I can vividly recall, he tutored us on the superlative capabilities of the A-29 Tucano which he described in his own words as, “A Fantastic bird that would soon start bombing those good for nothing people.”

Back then the issue of collateral damage in the use of captive human shields was beyond our collective imagination as “bloody civilians” – we were sidelined by the resident spin doctor at TVC. BKO took undue advantage of his viewers. We were so clueless!

But trust him, as Nigeria’s only military expert who passing through NDA was quite unnecessary for, he went on blah, blah…….precision, accuracy, purpose-built for our environment, game changer….. He went on, and on on how the newly imported combat aircraft would turn around the insecurity dynamic in Nigeria.

Yet, here we are.

With the benefit of hindsight on other national issues, I must confess, the thrill of watching BKO on screen is now gone. Meanwhile, the other program, ‘Issues with Jide’ – right from inception has always been to me, a television equivalent of quaffing flat beer.

BKO must endeavor to reinvent himself by replicating what Dele Giwa, Dan Agbese, Ray Ekpu, and Yakubu Mohammed did to professionally extricate themselves from the vice-like grip of the dominant political moneybag back of those days.

They honorably left National Concord to magnificently set up Newswatch. And when they goofed by watching others left them to, TELL the news then came, The News.

Similarly, BKO should clear out of the TVC stables to continue to be relevant in our national discourse. Like Farooq Kperogi, he is too talented to be so dependent on the whims and caprices of any political bat. No pun intended.

Anyway, Olúfẹ́mi Táíwò has an entirely different perspective on Nigeria’s security challenges which I find very compelling in a recent post entitled, ‘On Knowledge and Security’

“I would like to suggest that maybe the reason our security forces seem to fall short often enough and the problem of why the lack of security continues to fester is because we are repeatedly misdiagnosing the problem.

The reason is very simple. Bandits or terrorists, whatever name you call them matter little, have bases from which they operate, to which they return, or, in other cases, communities into which they melt, after each operation.

Why is this important?

From the commencement of their insurgence through their many splits and transformations, two words have remained constant: Sambisa Forest. We may now add to Sambisa other forests across the length and breadth of Nigeria, and we have the key to my contention that we have a knowledge problem.

Do we know our forests? This is not a trivial question.

Knowing in this sense is certainly much more than knowing that they are there and are forests. Do we have scholars who have studied these forests? If we do, where are the results of their studies? Is it that we have no access to those results, which will indicate a different set of problems? If we have access to them, what use are we putting them to in the ongoing struggle against terrorists and bandits? Do we have Forest Rangers?

Back in the day, were graduates of our various Schools of Forestry and civil servants charged with patrolling the forests, keeping an eye on illegal logging and other outlaw activities, equipped with knowledge of the flora and fauna of their domains, as well as the human settlements that were to be found therein. Again, where is the accumulated knowledge of these previous investments in our forests?

Do we have photogrammetric surveys of our forests — again, those who used to do them were part of the civil service structure in the past — with a view to delineating their boundaries? Where are our geographers who can supply the forests’ coordinates, what pathways, including roads, run through them; what bodies of water irrigate them and what is the state of their navigability; what caves they encompass, what hills and valleys dot their landscapes, what soil types predominate in which regions, and so on?

For those who are still not persuaded by my line of reasoning, every time someone in the government or the commentariat says, ‘we need better intelligence’, it is a pompous way of saying ‘we don’t know’.

There is no mystery to intelligence. The terrorists have it from those who supply them with food and other necessities, to those who report on military movement to them, to those who educate them on the lay of the territory in which they locate their operational bases.

Had we had available points-persons to go to on all aspects of those forests, just as part of extending our control over nature in our territory, would we now be rubbing our hands and praying for the special grace of the Almighty, by whatever name called, for deliverance in this hour of dire need?

This is why I argue that our problem right now is not one of security; it is a problem of knowledge or, more succinctly, a lack of knowledge. There is a lesson there for other areas of our lives.”

Olúfẹ́mi Táíwò is a teacher and researcher: https://africana.cornell.edu/olufemi-taiwo

Why I Left Nigeria to Start Mopping Floors, Cooking In the UK – Sola Sobowale