Euro 2022: England into the final after thrashing Sweden 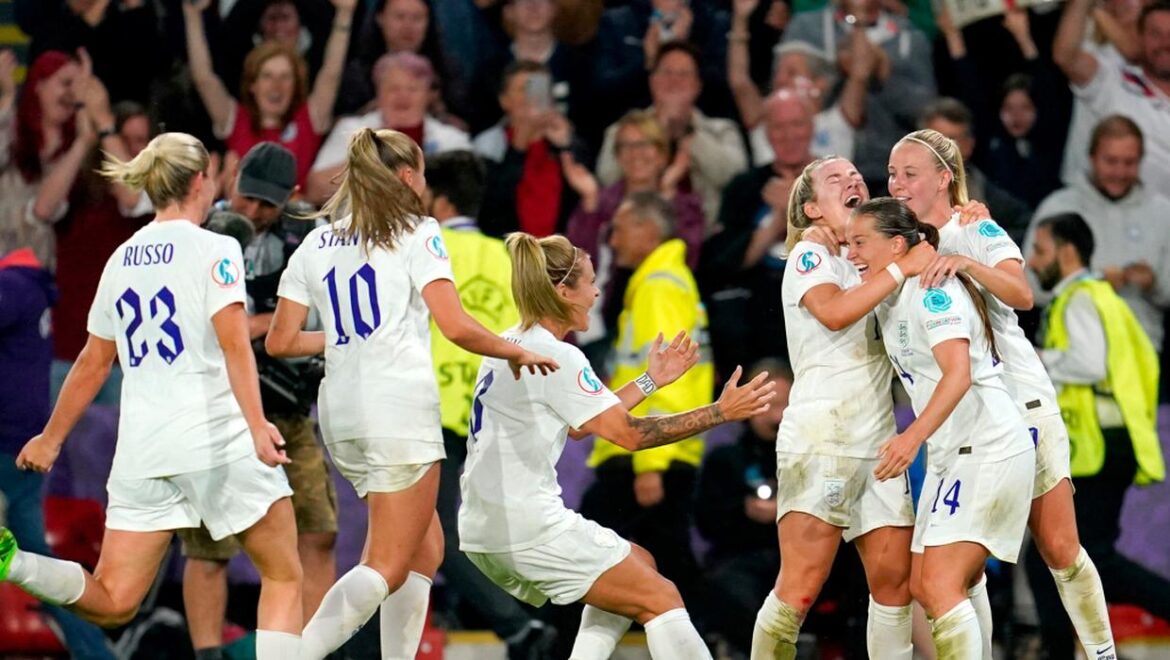 England reached their first major women’s tournament final since 2009 in stunning fashion as they put four past Olympic finalists Sweden at Euro 2022 in Sheffield.

The Lionesses, who extended their unbeaten run to 19 games under manager Sarina Wiegman, will play either Germany or France for the ultimate prize at Wembley on 31 July.

It was a thrilling match from start to finish at Bramall Lane as Sweden piled on the pressure in the opening 25 minutes, only for England to dismantle them with ruthless finishing and a touch of class.

Substitute Alessia Russo once again produced a moment of magic when her instinctive backheel made it 3-0 to England only 11 minutes after her introduction.

Golden Boot leader Beth Mead had put England ahead in the first half against the run of play, spinning and firing into the far corner, before defender Lucy Bronze headed in a second.

Chelsea’s Fran Kirby put the icing on the cake when she chipped despairing goalkeeper Hedvig Lindahl to complete the rout.
England keeper Mary Earps was in fine form, pulling off numerous saves to deny Arsenal striker Stina Blackstenius – the best coming early in the second half when she reacted to tip a looping effort inches over the crossbar from close range.

Blackstenius had earlier hit the crossbar before Mead’s opener swung momentum in England’s favour and from then on it was a display of their impressive attacking depth.

Victory for the Lionesses ends a 13-year wait to return to the final of a major tournament and they are the favourites to lift the trophy for the first time at Wembley on Sunday.

England one win away from glory
England have enjoyed some memorable moments with their fans already at this tournament but the post-match celebrations at Bramall Lane went up a gear.

The chants of “Football’s coming home” grew louder with each passing minute in the second half and rarely have its lyrics felt more believable.

After coming from behind to see off pre-tournament favourites Spain in the quarter-finals, England went one step further with this demolition of a Sweden side ranked second in the world.

They looked cagey and vulnerable at the start as Sweden piled on the pressure but England, as they have done so often under Wiegman, found an answer.

Mead’s opener seemed to release the shackles and as the crowd’s voice grew louder, England’s energy grew with it.

“We were struggling a little by the way they played defensively but we did better and better. The players on the pitch found solutions. And when we scored it obviously helped a lot.”

Bronze’s header gave them a cushion in the second half and Russo, scoring her fourth goal in four substitute appearances, once again made a huge impact.

Kirby’s cheeky chip added salt to Sweden’s wounds and from then on it was a party atmosphere at Bramall Lane as England’s place at Wembley was confirmed.

They are now one victory away from winning the nation’s first major football trophy in 56 years.

Mead extends Golden Boot lead
Mead has tormented every opposition at this Euros and it was only fitting she was the one to open the scoring and provide the catalyst for England’s impressive victory in Sheffield.

She spent most of the opening 25 minutes tracking back down the right to offer defensive support for Lucy Bronze but remained an outlet on the break.

But the Arsenal forward had England’s first big chance of the match when she glanced a header inches wide of the post within four minutes and it took just over half an hour for her to make her mark.

It was Mead’s sixth goal of the tournament – overtaking Jodie Taylor’s five at Euro 2017 which earned her the Golden Boot.

Mead can still add to that impressive tally at Wembley where she netted a second-half hat-trick against Northern Ireland in a World Cup qualifier last year.

Her closest challenger is Germany’s Alexandra Popp on four goals – although she could add more in Wednesday’s semi-final against France – and the two could go head-to-head in the final.

“It’s nice to be up there [in the Golden Boot race] but sometimes being chased isn’t always the nicest,” Mead joked.

“It’s nothing I ever thought about being close to. I’m really happy to be where I am but it’s not something I’m thinking about – I just want to win with the team.”

The Manchester United forward has developed into a terrifying weapon for England off the bench and when she came on the crowd were on their feet in excitement for what was to come.

She took less than a minute to deliver – firing an inch-perfect cross to the back post for youngster Lauren Hemp, but she could only slice it onto the crossbar.

Russo’s moment would arrive 11 minutes later, when her initial strike was well saved, only for the 23-year-old to audaciously backheel the ball under the keeper’s legs from close range as she ran away from goal.

It drew gasps from those in the crowd and as Russo ran, arms outstretched with her mouth wide open in shock, England suddenly looked sure of a place in Wembley’s final.

“When the third goal went in you start believing obviously,” said Mead. “What a night.

“The game becomes blurry when there’s that much excitement and that much emotion. I’m super proud to be English and part of this team right now.”

Wiegman has named the same starting XI in all five of England’s Euro 2022 games but Russo, who is joint-second in the Golden Boot race, could not have given a better audition for a starring role.

The Lionesses unbeaten record under Wiegman will now be tested in the final by eight-time European champions Germany, or a France side looking for their first major trophy.

“This team has showed [composure] now a couple of times,” said the Dutchwoman. “The opening game was a big one too and we were also calm.

“Yes, we could have started a little better. I have confidence in this team and in our players to stay calm, stick to the plan. We have spoken about all the scenarios.”