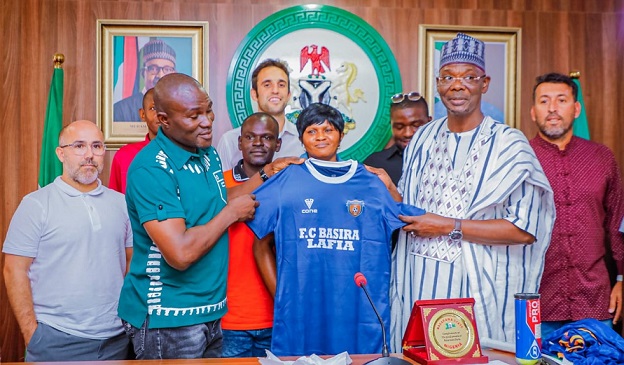 Led by Ms Gladys Stephens, the delegation said it was in Nasarawa State to hunt for football talents and seek concrete partnership with the State Government in football and human resource development.

Ms Gladys explained thus: “We are here at the instance of Salisu Galadima Basira for a talent hunt program as well as offer opportunity to grassroots footballers to actualize their dreams.

“Beyond this, we are proposing to establish a Football Academy in Nasarawa State where the State Government will partner with major La Liga Clubs in Spain to develop football and coaches in the State.

“Talents discovered and developed through the Academy will be sent to Clubs in Spain and Europe for further development and subsequent sale, while parts of the proceeds will come to the State Government.

“These, among others, will go a long way in creating jobs and taking the youth of the State off the streets and other social vices.

“It will also add to the revenue drive of the State.”

She stated that a Memorandum of Understanding will be signed between Real Betis and the Nasarawa State Government in Spain, to formalize the partnership.

The leader of the delegation disclosed that Nasarawa State is the first State to enjoy the opportunity, stressing that it was in view of the premium the Sule administration places on sports development and youth empowerment.

In his remarks, the Governor, Engr. Abdullahi Sule thanked the facilitator of the program, Salisu Galadima (Basira), and the delegation for bringing such a laudable project to the State.

“We thank Salisu Galadima(Basira) for inviting you to come and be part of this talent hunt and thank you for selecting Nasarawa State to kickstart it.

“Every state has its own array of talents and potentials in sports, and I think this is an opportunity for our talented youth to showcase their potential.”

Governor Sule assured the delegation of the Government’s determination to provide a level-playing ground for the project to be attained.

“Spain is known for their rich football culture, so also in Nigeria, which makes us have belief in your ability to achieve your goals.

“Already, we have a Sports Academy at Akwanga, and an array of gifted footballers. So, when you establish the Football Academy, that is where you know what manner of huge talents we have in our State.

“However, we feel highly delighted to partner with you in the establishment of the proposed Football Academy.

“So, when the MoU is ready, our Commissioner for Youth and Sports Development, together with other critical stakeholders, will work with you in order to arrive at a compromise.”

Also present in the meeting were the Deputy Governor, Dr. Emmanuel Agbadu Akabe, and other Cabinet Members of the State.

Souvenirs were presented to the Governor by the delegation.

The scouting program which was held at the Area 3 Football Field, Abuja, was facilitated by Salisu Galadima (Basira), owner of Nationwide League One Club, FC Basira, with over two hundred grassroots talents participating, 140 of whom are from Nasarawa State, with the rest coming from Plateau, Kaduna, Gombe, Bauchi, and the Kano States, respectively.