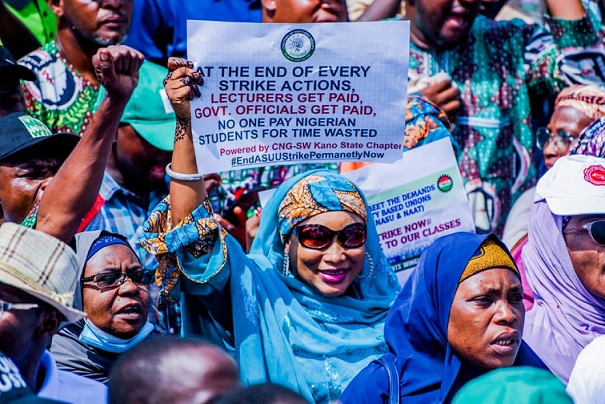 The Nigerian government has been called to remove the Minister of Education, Alhaji Adamu Adamu from his position for his inability to play a positive role in getting the government to meet up with the needs of the Academic Staff Union of Universities (ASUU) that has left Nigerian Universities closed for over three months.

The call was made by union leaders at a solidarity protest organized by the Nigerian Labour Congress, NLC, in Kano on Tuesday.

Also, the union leaders called for the removal of Dr. Chris Ngige from his position as Minister for Labour and Employment for his inability to resolve the ASUU strike.

The protesters who raised placards calling for the removal of the duo expressed dissatisfaction with the mishandling of the education sector by the Buhari administration.

Delivering his address at the close of the peaceful march to the Government House Kano, the NLC Chairman, in Kano, Ado Minjibir stated that the Union in solidarity with ASUU is calling on the Nigerian government to meet the demands of ASUU and also pay their salaries for the periods they have been on strike.

“No country can develop without a standard sector of education.

“The inability of the government to meet the demands of the Academic Staff Union of Universities is what has led to the strike in our tertiary institution and there is a need for intervention.

“The strike has stalled education in the country as the government has refused to meet up with the agreement it voluntarily entered with the union.

“Hence, in compliance with the resolution of the National body of the NLC, we have joined the protest. If nothing is done by the government, we will go on a three-day warning strike after which we will engage in an indefinite strike” the Kano union leaders stated.

In his response, the Kano state governor, Abdullahi Ganduje, who received the protesters at the gate of the Government House Kano stated that the crisis between ASUU and the Federal Government was inherited from previous administrations.

However, he stated that the Nigerian Governors’ forum will ensure that the crisis is permanently resolved while expressing the support of the governors for the development of education in the country.

“The situation is unfortunate because the students are affected and could lead some to bad situations.

“We assure you that the crises will come to an end with the support of the Governors Forum” Ganduje stated.