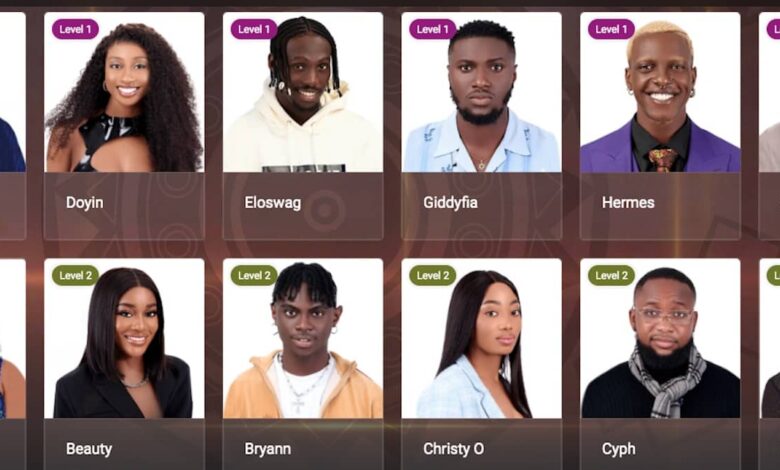 The BBNaija S7 show is not without major side attractions from its housemates that appeared on the show with some very weird characteristics.

Some of their features are special and unique that no other housemates share their intriguing nature and bizarreness.

List of BBNaija S7 Participants with Bizarre, Outstanding Personalities
The likes of Hermes Chibueze Iyele that joined the rest of the housemates on Sunday 24, 2022, got some funny descriptions from fans of the show.
An anonymous fan of Hermes once described him as someone that broke out from Kuje Prison with the weird hair color he’s parading around in Biggie’s house.

Personally, he described himself as a ‘polyamorous lover.’ It means an individual engaging in multiple romantic (and typically sexual) relationships with the consent of others.

However, something interesting about him is his role in the entertainment industry, involving himself with artistes like Burna Boy, Ajebo Hustlers, and Davido, among others.
One of the catchiest phrases delivered by the BBNaija Season 7 contestant is that he tells the truth but only ‘Diplomatically’.

Next on the list is Chichi. Fans were amazed when she stepped into the scene with the big energy entrance, claiming she’d wow fans with a strip tease never seen.
So far, Chinenyenwa Desire Okoebor already started match-making, with other bbnaija 2022 housemates, to begin the ‘Ships’ that may last or collapse before the show ends.

What also caught fans’ attention is that she’s an exotic dancer and a Chef. Imagine somebody strip-teasing for you while preparing food for your delight.

She insists that there is more to stripping than meets the eyes, adding that she has so many hidden talents that come with the vibes.

Third on the list is Phyna. She came in with the impression of schooling her co-housemates on sexual experience.
Also, she was the first to flash her n!pple when Big Brother accepted the first selection into the house.

Ijeoma Josephina Otabor, simply called Phyna, made it clear that she wasn’t around for the fake friendship and fraternising, that she was here for the ‘vawulence’.
Sheggs, real name Segun Daniel Olusemo, is a fascinating individual that genuinely has little or zero weird attributes.
A professional footballer initially based in England, sustained an injury, yet continued in his hustling spirit and returned to a former profession of his – acting.

However, one strange thing evident about him is his extra attraction to women in the house as a ‘fine boy’.

He oozes the smell of a true Nigeria playboy and is characterised by his flirting skills.

Last on the list, but not least, is Beauty. Beauty Etsanyi Tukura, surprisingly, is a lawyer and one-time miss Nigeria, a feat achieved in 2019.
Sadly, she had to write the Nigeria Bar Association examination twice after failing the first attempt.

In the house, she seems to be attracted to Groovy that has not shown much interest in her as he once refused to kiss her during one of the games.

What is weird about her is the fact that as beautiful as she looks and a crowned-miss Nigeria, she still throws herself into men finding little interest in her.

Or is it just her strategy to draw them closer and later give the men the Angel Smith treatment known for using and dumping men.
(Everyevery)