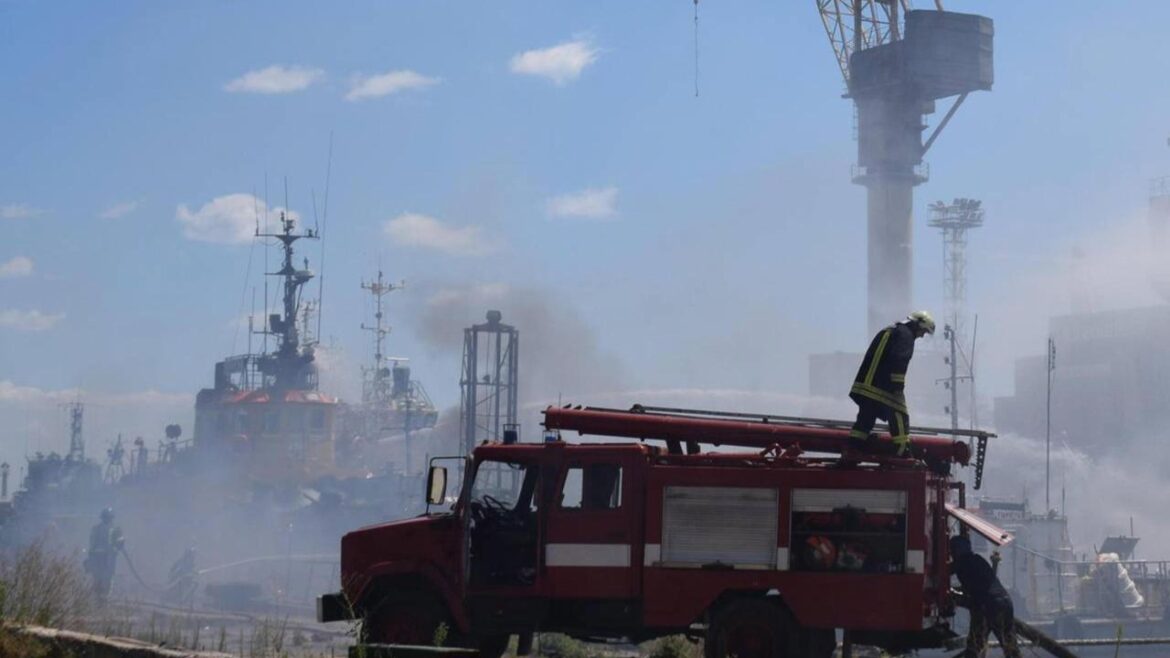 Ukrainian President Volodymyr Zelensky has accused Russia of “barbarism” after a missile attack on the port of Odesa.

A landmark deal to resume Ukraine’s grain exports – signed hours before the strike – now hangs in the balance.

Moscow has not commented on the attack and Kyiv has said preparations are still underway to resume the grain exports despite the apparent breach.

But on Saturday President Zelensky said it illustrates how Moscow cannot be trusted to stick to the deal.

He vowed to do everything possible to acquire air defence systems able to shoot down such missiles in the future.

Ukraine is a major grain exporter, but because of the war, about 20m tonnes of grain is trapped in its ports, unable to leave because of Russian forces. This has lead to food shortages and price rises across Africa, which usually relies on Ukraine and Russia for wheat.
Under Friday’s deal, Russia agreed not to target ports while grain shipments were in transit.

But just hours after the agreement was signed, two Kalibr missiles hit Odesa port, according to the Ukrainian military’s southern command centre. Another two missiles were shot down by air defence systems, it added.

The strike caused no significant damage to the port, the command centre said.

The attack has been widely condemned. US Secretary of State Antony Blinken accused Russia of worsening a global food crisis, and said the attack cast “serious doubt” on the credibility of Russia’s commitment to the pact.

“Russia must stop its aggression and fully implement the grain deal to which it has agreed,” he said on Saturday.

The Kremlin has so far made no public comment on the attack, however the Turkish government, which brokered the deal, said Russian officials had denied responsibility.

“In our contact with Russia, the Russians told us that they had absolutely nothing to do with this attack and that they were examining the issue very closely and in detail,” said Defence Minister Hulusai Akar.

In another development, Hungarian Prime Minister Viktor Orban said Ukraine could not win against Russia.

Speaking at an international conference of conservatives, he said the war could only be ended by peace talks between Washington and Moscow.

“A new strategy is needed, which should focus on peace negotiations instead of trying to win the war,” said Mr Orban, whose views on the conflict are often at odds with those of other EU leaders.
On Friday, officials from Kyiv and Moscow signed a deal to allow millions of tonnes of grain trapped in Ukraine to be exported.

The agreement was hailed as a “beacon of hope” by the UN after months of fighting.

The deal – which took two months to reach – is set to last for 120 days, with a co-ordination and monitoring centre to be established in Istanbul, staffed by UN, Turkish, Russian and Ukrainian officials. It can be renewed if both parties agree.
EU foreign affairs chief Josep Borrell said the attack on Odesa had shown Russia’s “total disregard” for international law.

“Striking a target crucial for grain export a day after the signature of Istanbul agreements is particularly reprehensible,” he tweeted, adding that the EU “strongly condemns” the attack.

The BBC’s Paul Adams in Kyiv says it is tempting to see the attack on Odesa as an attempt to wreck the grain deal.

But our correspondent says that seems to run counter to remarks by Russian Defence Minister Sergei Shoigu that Russia’s responsibilities were clearly set out.

In the latest fighting on the ground, British defence officials said Russian troops in the Kherson region risked being cut off from their supply lines by Ukrainian forces.

If the bridge were to be destroyed, Russian supply lines would be severely stretched.
(BBC)