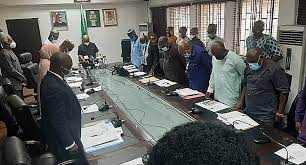 The strike crisis in the nation’s public university system has taken a new twist as members of the Senior Staff Association of Universities (SSANU) and the Non-Academic Staff Union of Universities (NASU) rejected the report of the Professor Nimi Briggs-led renegotiation committee.

Both unions insisted that they would not be bound by the recommendations of the committee which was set up by the Federal Government to end all strikes across the nation’s universities.

NASU General Secretary, Peters Adeyemi, and SSANU National President, Mohammed Ibrahim, made the position of the unions known on Friday at a joint press conference in Abuja.

They said they never concluded negotiations with the committee before it submitted its recommendations to the government for implementation, stressing that such an action was a betrayal.

In a bid to resolve the crisis in the university sector, the Federal Government in March constituted a committee headed by Professor Briggs to negotiate with NASU and SSANU, as well as the Academic Staff Union of Universities (ASUU).

ASUU had grounded academic activities in public universities since February 14 when the lecturers embarked on strike, a situation that became complicated when NASU and SSANU also downed tools in April.