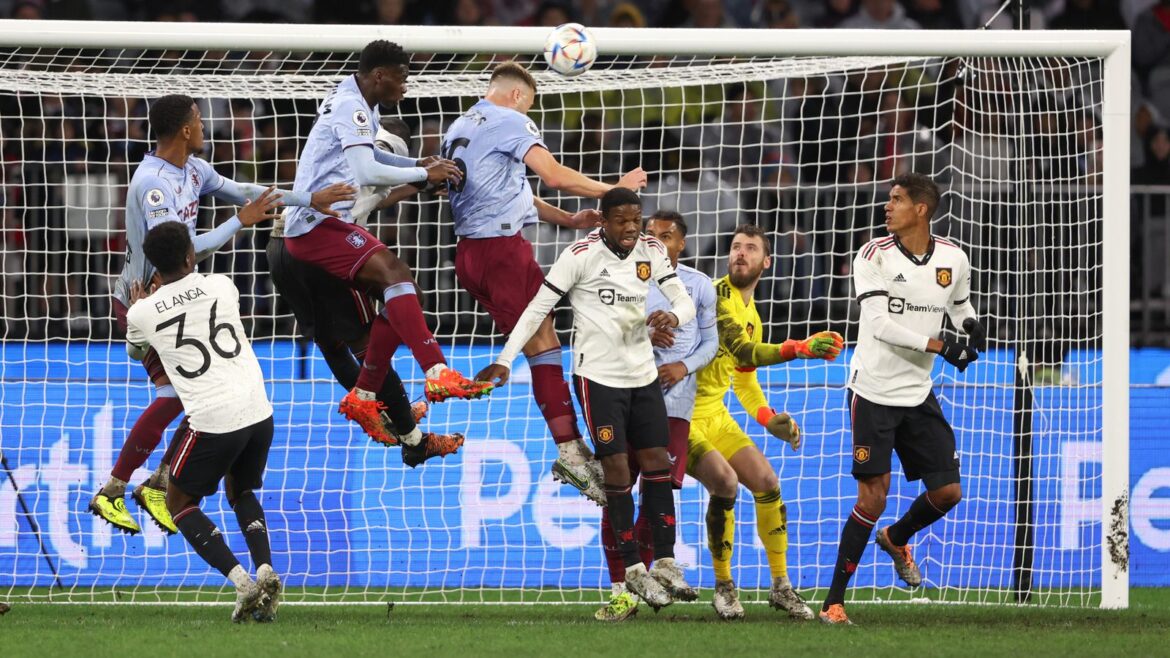 Calum Chambers’ stoppage-time header cost Manchester United their 100% pre-season record under new manager Erik ten Hag as Aston Villa came back from two goals down to end their own tour of Australia unbeaten at a rain-sodden Optus Stadium in Perth.

Chambers rose unchallenged to nod home a rather soft second that will give Ten Hag something to ponder on his side’s return to Manchester.

Jadon Sancho’s third goal of the trip had given United an early lead and when Villa’s Matty Cash turned a Marcus Rashford effort beyond the reach of his own keeper Emi Martinez, it seemed victory was secure.

But substitute Leon Bailey pulled a goal back right after half-time and Chambers’ effort was reward for a much-improved performance by Steven Gerrard’s men.

United are expected to complete the signing of Argentina defender Lisandro Martinez from Ajax in time for him to start training with his new team-mates, including Christian Eriksen, early next week, before encounters with Atletico Madrid and Rayo Vallecano. On this evidence, they might need him.

Quite possibly both Ten Hag and Gerrard will be more concerned at finding out if their respective squads got through the game without injury.

Poor weather and poor pitch
Numerous heavy showers in the hours before kick-off left the pitch in an awful state.

Ground staff tried to get rid of the excess water from three hours before kick-off and host broadcaster Channel 10 said in commentary there had even been a plan to fly a helicopter over the grass in an effort to dry out the surface.

That did not happen in the end, although neither set of players looked comfortable when they tried to turn and as Gerrard had his hood pulled over his head to protect himself from another downpour when United’s second goal went in, it did not indicate he was having a particularly great time.

The Villa boss’ mood will have improved when Bailey cut inside Victor Lindelof and curled a shot into the bottom corner at the start of the second half.

Sancho was the wide player who lit up the opening period though.

The former Borussia Dortmund winger has played for England only once since he missed a penalty in the Euro 2020 shoot-out defeat by Italy in the final just over 12 months ago.

He struggled in his debut season at Old Trafford but, with three goals in four games, he has finished as joint top scorer on tour with Anthony Martial and looks like the attacking threat that brought him to United’s attention in the first place.

His latest effort was excellent, with Martial, Bruno Fernandes, Marcus Rashford and Luke Shaw all involved before Sancho volleyed home at the far post.

Not that everything went United’s way.

Bailey would have levelled had Harry Maguire not slid back to turn away his goal-bound effort after the Jamaican had skipped past David de Gea, while Ezri Konsa failed to convert with the goal at his mercy.

Chambers had the final word – allowing both clubs to end their respective tours unbeaten.

“It’s not possible that you go 2-0 and then throw it away,” he told BBC Sport.

“It was the focus. I don’t want to make excuses about the pitch or weather. No matter what, we have to perform.

“Football is a sport of mistakes and we have to decrease the mistakes. That’s clear but I have seen a lot of progress in these two weeks.

“In the first half I saw really good football, really controlling and dominating the game but we have to learn from what happened in the second half.”
(Goal)

Ndidi returns to action for Leicester City after four-month