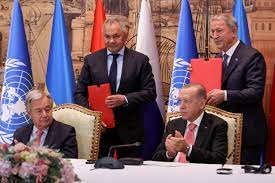 Ukraine and Russia have signed “mirror” deals which will allow Kyiv to resume exports of grain through the Black Sea.

The agreement will allow millions of tons of grain, currently trapped in Ukraine by the war, to be exported.

The world shortage of Ukrainian grain since Russia’s 24 February invasion has left millions at risk of hunger.

However, Kyiv refused to sign a direct deal with Moscow, and warned “provocations” would be met with “an immediate military response”.

The deal – which took two months to reach – is set to last for 120 days, with a co-ordination and monitoring center to be established in Istanbul, staffed by UN, Turkish, Russian and Ukrainian officials. It can be renewed if both parties agree.
The blockade of Ukraine’s grain has caused a global food crisis with wheat-based products like bread and pasta becoming more expensive, and cooking oils and fertilizer also increasing in price.

The US called on Russia to act quickly, with White House spokesman John Kirby saying it was necessary “to prevent the world’s most vulnerable from sliding into deeper insecurity and malnutrition”.

Mr Shoigu told a news conference earlier the deal might allow “the solutions to start this process in the coming days”.

According to diplomats, under the terms of the deal:

Russia will not target ports while shipments are in transit
Ukrainian vessels will guide cargo ships through waters that have been mined
Turkey – supported by the United Nations – will inspect ships, to allay Russian fears of weapons smuggling
Russian exports of grain and fertiliser via the Black Sea will be facilitated.
UN Secretary General Antonio Guterres told the BBC’s Orla Guerin it was probably the most important thing he had done in his time heading the international body.

“Today, there is a beacon on the Black Sea,” he told the audience gathered in Istanbul. “A beacon of hope.”
Just the prospect of unblocking more than 20 million tons of Ukrainian grain led to a 2% drop in wheat prices on Friday.

However, there was still skepticism from the Ukrainian side ahead of the signing.

An MP for Odesa, the center of Russia’s grain blockade in Ukraine, said he still did not trust the Kremlin because of past behavior. Oleksiy Goncharenko told BBC World News “we don’t believe Russians” – adding that Russia would only sign a deal if they felt there was no other option.

Mr Guterres also admitted to the BBC that the UN had no means of punishing Russia should it breach the deal – but added it would be “an absolutely unacceptable scandal and the whole international community would react in a very strong way”.

But Mr Shoigu assured reporters that Russia had “taken on the obligations” under the deal, and they would “not take advantage of the fact that the ports will be cleared and opened”.

Russia has always denied blockading Ukraine’s ports – it blames Ukraine for laying mines at sea and Western sanctions for slowing Russia’s own exports.

In a piece aimed at newspapers in Africa, Foreign Minister Sergei Lavrov blamed the West and Ukraine for the “absolutely groundless” allegations. He praised the “balanced position of the Africans regarding what is happening in Ukraine and around it”.

Ukraine, however, says the Russian navy prevents it shipping grain and other exports and accuses Russian occupation forces of stealing grain from Ukrainian farms.
The grain export deal will also come as a big relief to the Horn of Africa, the BBC’s Anne Soy says from Nairobi, Kenya. The region is currently facing serious food shortages caused by drought, and exacerbated by the Covid-19 pandemic, a rare locust invasion, and the war in Ukraine.

Samantha Power, the US development agency’s administrator, said the deal was “an extremely important piece of a puzzle” in solving the region’s crisis.

Meanwhile, Turkey’s President Recep Tayyip Erdogan – who has played a crucial role in negotiations – said he hoped the deal might be the first step towards bringing the war to an end.

“This joint step we are taking with Ukraine and Russia will hopefully revive the path to peace,” he said.

Mr Guterres was less positive, saying: “At the present moment, I see no conditions for a peace process.”
Antonio Guterres said it was unprecedented to get two parties, locked in a bloody conflict, to agree to a deal of this kind.

President Erdogan went further, predicting it could set the scene for steps to end the war altogether.

But despite today’s hopeful signs, a wider agreement seems a rather remote possibility. In recent days, Russia has indicated that it might once again be willing to expand its war aims, while here in Kyiv, there’s talk of when and where Ukraine might launch some kind of counter-offensive.

The arrival of sophisticated western equipment has given Ukraine a renewed sense of optimism. Yesterday, the head of MI6, Richard Moore, predicted that Russia’s campaign would soon run out of steam, giving Ukraine the opportunity to strike back. If there is to be a wider peace process, following the deal struck in Istanbul, it seems only President Erdogan is currently talking about it.
(BBC)