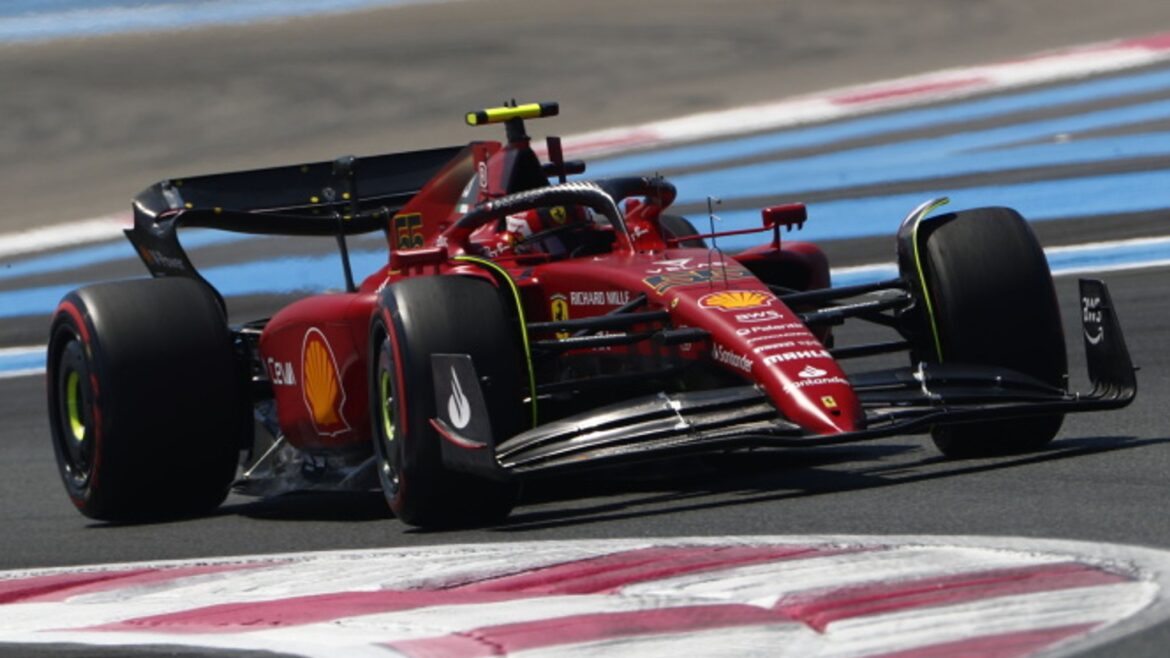 Ferrari’s Carlos Sainz and Charles Leclerc are wary of the pace of Red Bull despite finishing Friday practice on top at the French Grand Prix.

The Ferraris had a large advantage over Max Verstappen, who was third, 0.550 seconds off Sainz’s pace-setting time.

But on race pace, the tables turned, and Verstappen was comfortably faster.

Leclerc said: “Max seems particularly quick on the high fuel. So I don’t know how much fuel they were running. That is a bit of a question mark.”

Leclerc starts the weekend 38 points adrift of Verstappen in the drivers’ championship after his victory in the Austrian Grand Prix last time out ended a poor run of results for him.
He was 0.101secs slower than Sainz on the one-off qualifying simulation laps, where Ferrari’s decision to run a higher engine mode than Red Bull will have accounted for at least some of Verstappen’s deficit.

Leclerc said: “It was a good Friday. We still have to work on the car a little bit.

“It is very difficult to understand because it feels like Red Bull is doing something different to us on Fridays. But focusing on ourselves, the feeling is good. We just need to put everything together and the pace is in the car.

“If we do the perfect weekend, we will be fighting for the win.”

Verstappen was struggling with a lack of front grip in second practice, which could explain some of his struggles over a single lap.

Despite its lower engine mode, the Red Bull was especially quick on the straights, while Ferrari had an advantage in the corners of the first and last sectors of the lap.

Leclerc seemed to struggle with high tyre degradation on his race-simulation run as his times dropped off quite severely as the laps progressed, but he ran longer than Verstappen so it was difficult to get a clear comparative picture.

Verstappen said: “FP2 was a little bit more difficult for us. We didn’t really get the balance we hoped for but also we were trying a few things with the car.

“We will have a look at it all tomorrow and try to be closer. In the long run, it was a little better but the tyres are running really hot and it’s very difficult to judge where you are.

“We know we still have a little bit of work to do. This track is very hard on tyres and in general we all needed a few more laps to have a good look at the long run.”

Sainz will not feature in the lead battle in the race because he has a grid penalty for using excessive engine parts.

The Spaniard already has a 10-place drop for exceeding his allowance of electronics control units, and is expected to start from the back as a result of Ferrari taking more parts on Saturday morning – the same pattern of events as with Leclerc when he was in the same situation in Canada.

Sainz more or less admitted this after practice on Friday.

He added: “I didn’t do many laps on the short run on the low field but every lap I did was super-competitive so it shows the steps we are taking is going in the right direction.

“I was focusing more on the long run because I am not going to be in the fight for pole position given the amount of penalties.

“In the long run there is a bit of work to do but at the same time some encouragement from the short run.”

Both top teams have upgrades on their cars, focused on changes to the floors.
As usual, Mercedes found themselves not quite quick enough to challenge at the front, but clear of the midfield behind.

The team were expecting Paul Ricard to be one of the tracks that helped their car move towards the front, but that did not appear to be the case on Friday.

George Russell and Lewis Hamilton were fourth and fifth fastest, Russell 0.764secs off the pace and Hamilton just over 0.2secs further back after missing the first session while reserve driver Nyck de Vries fulfilled one of the two mandatory driver development days for Mercedes.

Russell said: “Our high-fuel pace was better than our low-fuel pace so we need to make sure there are no midfield cars between us and the front four. The Ferraris struggled a bit more than us (on the long run), Max looked very fast as usual, work to do.”

Hamilton added: “The car is not spectacular here and we don’t know why but hopefully overnight we usually make a bit of a step so I’m hopeful that’s the case tomorrow.

“(There is) quite a bit of (tyre) degradation, I would be surprised if it’s (a) one-stop strategy.

“We’re still not as quick as the front guys, we’re a little bit further back than we were in the last race.”
What about the rest?
Lando Norris set an encouraging time for McLaren following the introduction of an upgrade in sixth place, ahead of the heavily upgraded Alpha Tauri of Pierre Gasly.

Completing the top 10 were the Haas of Kevin Magnussen, Daniel Ricciardo’s McLaren and Red Bull’s Sergio Perez, who said he was “not very comfortable at the moment with the car”.

Norris ran the McLaren upgrades, which are focused on the sidepods, only in the second session, so he could compare them with the previous design, whereas Ricciardo had them in both sessions.

Norris said: “We expected a small step. It’s too early to say. Some things to optimize and figure out. Reasonable. I still have to figure out how to drive the car.”