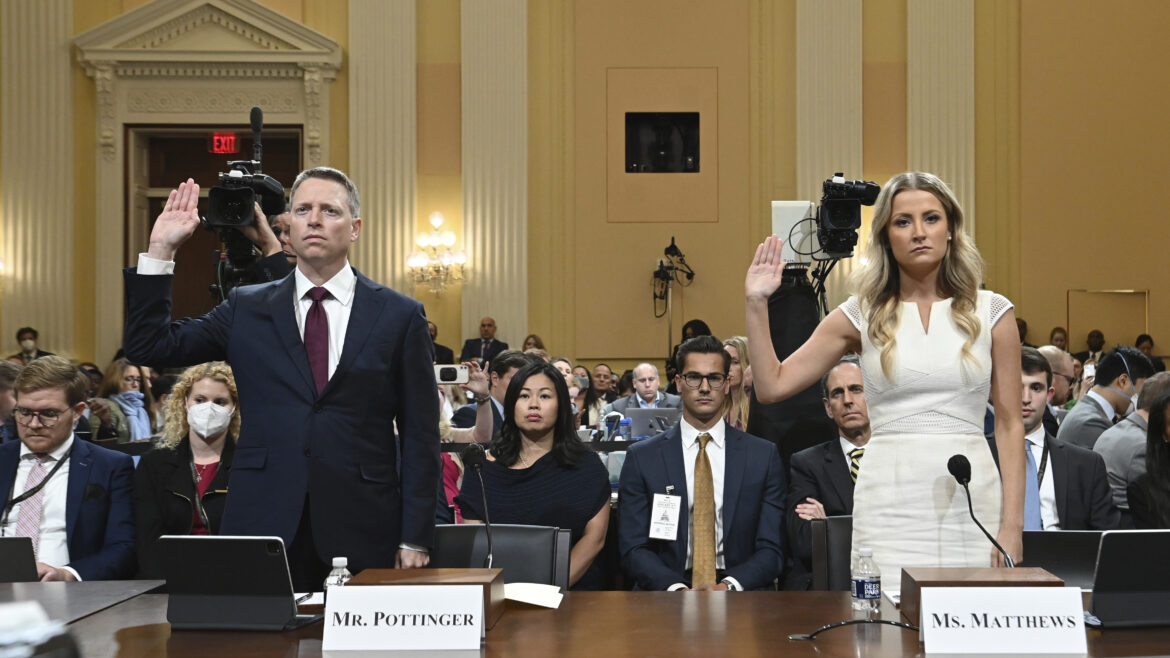 Ex-US President Donald Trump watched last year’s Capitol riot on TV at the White House, ignoring his children and aides who “begged him” to rebuke the mob, a congressional inquiry has heard.

“He chose not to act,” said Adam Kinzinger, one of two Republicans on the Democratic-led committee.

The primetime hearing was told Mr Trump did not place a single call to law enforcement or national security staff.

He was motivated by “his selfish desire to stay in power”, the inquiry alleged.

On Thursday night, the House of Representatives select committee used its eighth hearing of the summer to draw a timeline of Mr Trump’s activities over 187 minutes on 6 January 2021 as a mob of his supporters raided Congress.

The panel is seeking to build a case that Mr Trump, a Republican, acted illegally in a bid to overturn his defeat by Joe Biden, a Democrat, in the November 2020 presidential election.
Mr Trump, who has been hinting he may run again for president in 2024, has dismissed the inquiry as a “kangaroo court” designed to distract Americans from the “disaster” of Democratic governance.

The hearing was told that former President Trump had watched coverage of the riot on Fox News in the private dining room at the White House for more than two-and-a-half hours.

Elaine Luria, a Virginia Democrat on the committee, said: “President Trump sat at his dining table and watched the attack on television while his senior-most staff, closest advisers and family members begged him to do what is expected of any American president.”

The lawmaker also said the chief White House photographer had wanted to take pictures during the historic event, but was told not to.
A former White House national security staffer, whose voice was obscured to conceal his identity, said officials in the executive mansion were “in a state of shock” over what was unfolding at the Capitol.

The committee also played parts of a videotaped testimony by former Trump White House counsel Pat Cipollone, who said he had pushed for a strong statement from the president condemning the onslaught.

The president’s children, Ivanka Trump and Don Jr, had also wanted him to call off the rioters, the committee heard.

But former press aide Sarah Matthews testified that an unnamed White House colleague had argued that if Mr Trump were to disavow the violence it would be “handing a win to the media”.

At 14:24 that day, Mr Trump sent a tweet attacking his Vice-President, Mike Pence, saying he “didn’t have the courage to” spurn his constitutional duty of certifying Mr Biden’s election win at Congress.

Ms Matthews said the post amounted to “pouring gasoline on the fire”. She and Matthew Pottinger, who was deputy national security adviser to the president, testified that that tweet had prompted them both to resign.

Three hours and seven minutes after the assault began, Mr Trump released a video at 16:17, recorded from the White House Rose Garden, in which he praised the rioters as “very special”, but asked them to disperse.
Bennie Thompson, chairman of the committee and a Mississippi Democrat, said in his opening remarks: “For 187 minutes on Jan 6, this man of unbridled destructive energy could not be moved.

“Not by his aides, not by his allies, not by the violent chants of rioters, or the desperate pleas of those facing down the mob. He could not be moved.”

The committee also aired a previously unseen video outtake of Mr Trump on 7 January repudiating the violence at the Capitol of the day before.

“I don’t want to say the election is over,” Mr Trump said during the recording as he apparently read from a script.

The panel has suggested there might be enough evidence to charge Mr Trump with such counts as obstructing an official proceeding of Congress, conspiracy to defraud the American people, or witness tampering.
(BBC)

Osun: Buhari Does it Again

It’s Time We Pull Together, Rebuild APC In Rivers – Peterside