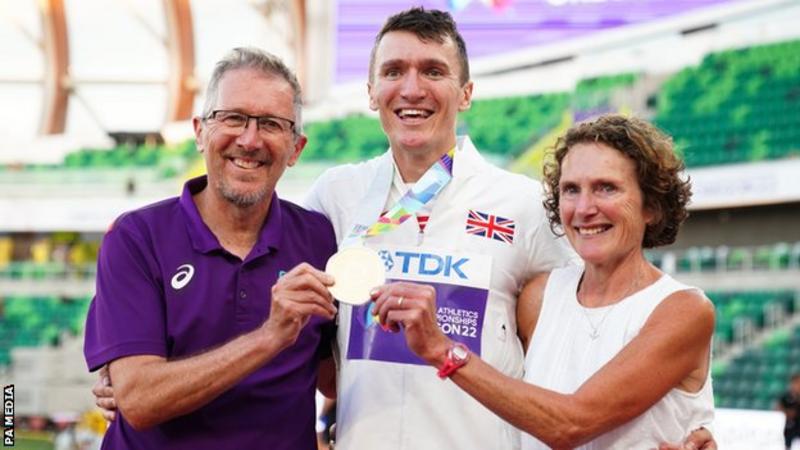 The 28-year-old produced a brilliant final burst to pass Olympic champion Jakob Ingebrigtsen and clinch the title in three minutes 29.23.

Wightman looked stunned as he crossed the line in a world-leading time.

Wightman’s father, Geoff, is the stadium announcer in Eugene and was able to call his son’s victory.

“Running is coming home. Wow. That is my son and he is the world champion,” he told the Hayward Field crowd.

It is Britain’s second medal of the championships after Laura Muir won bronze in the women’s 1500m on Tuesday.
Scotland’s Wightman produced a superb tactical race, timing his final move to perfection.

With Ingebrigtsen leading as the bell rang, Wightman pushed forward, passing him with 200m to go and then keeping him at bay to claim gold.

“I was running for my life down the home straight,” Wightman told BBC Sport.

“It is still just shock and disbelief that this has actually happened. It probably won’t sink in until I have retired.”

‘His fastest run on the biggest stage’
Wightman won Commonwealth and European bronze in the discipline in 2018 and broke the Scottish record at a Diamond League meet two years ago.

He was disappointed to finish 10th in the Olympics last year and credited that with pushing him on to claim the biggest title of his young career.

“I don’t think people realize how crushing it is to go in with such high expectations and come away 10th,” he said.

“I have given up so much to get to this point, such a lot of things sacrificed, and this makes everything worth it.”

Wightman received his medal shortly after his race on Tuesday as the ceremony, which was initially scheduled for Wednesday, would have clashed with his flight home.

An emotional Cram, who commentated on the race on BBC TV, praised Wightman’s “racing brain”.

“He has never been a person who talks about his running – he has always wanted his performances to speak for him,” Cram added.

“His mum and dad have been so supportive and it has just been this incremental improvement all the time.