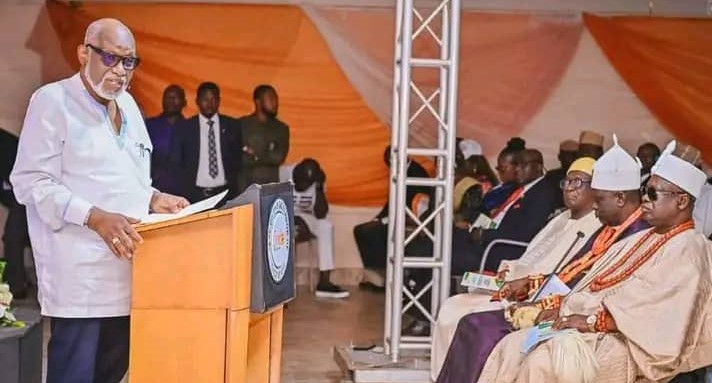 The Council is led by Deji of Akure kingdom, Oba Aladetoyinbo Aladelusi as the Chairman.

The Chief Press Secretary to Governor Akeredolu, Richard Olatunde in a statement said he congratulated Oba Aladelusi on his appointment as the Chairman of the Council for a tenure of two years.

Governor Akeredolu who applauded traditional rulers in the state for joining hands with his administration in addressing the challenges of insecurity also encouraged them to do more to secure their respective domains against criminals.

He said the State Council of Obas has, in recent years, built for itself a robust relationship with the government through its steadfastness, loyalty, sacrifice, and commitment to its statutory roles.

He further expressed confidence that the new council would not deviate from the noble role but shall build on the foundation already laid down and the achievements made by the past councils.

The Governor said his administration, since inception, has been according to the Kabiyesis their pride of place in the scheme of things, and will not, in any way, take them for granted.

Arakunrin Akeredolu assured the Monarchs of his administration’s resolve not to play down the roles of traditional rulers and their immense contributions to governance.

“No doubt, the Council of Obas in Ondo State has come of age. The Council, otherwise known as the Council of Chiefs in the Chiefs’ Law, is established by the provisions of the Chiefs Law 1984 (as amended by Edict No. 4 of 1991) under Part V, Section 33.

“It is worth mentioning that the Council has no doubt, offered invaluable advice to our administration which had helped tremendously in giving policy direction,” the Governor added.

Akeredolu further explained that his administration remained more committed to delivering on its electoral promises, adding that he will not relent in his good works.

He noted that in spite of all odds, his administration will ensure that all State resources are pooled for maximum utilization for the growth and development of the dear State.

Speaking after his inauguration, the Deji of Akure, Oba Aladetoyinbo Aladelusi, appreciated Governor Akeredolu for approving his appointment as the Chairman of the Council.

He promised to join hands with the Governor in the fight against the common enemies of the state and the people.

The Deji of Akure particularly commended the Governor for his unwavering commitment to the security of lives and property of the people of the state.

He added that the traditional rulers in the state would continue to support the REDEEMED agenda of the government for the overall development of the Sunshine State.

“Today, the roles of the traditional institutions in fighting crime, maintenance of peace, mediation between the government and her employees, mediation through alternative dispute resolution among others have continued to become more prominent and increasing in recent times.

“It is obvious that the Royal Fathers play a crucial role in curbing crimes and other social vices occasioned by the rising insecurity and its attendant effects in our country,” he added.

The Akure monarch also appreciated the Governor for backing an Akure man, Prince Ademola Adegoroye, to be Minister of the Federal Republic of Nigeria, noting that the development gladdened their heart and would be continually appreciated by the people.

Earlier, the Commissioner for Local Government and Chieftaincy Affairs, Akinwumi Sowore, who lauded the Governor for his respect for traditional rulers across the state, also commended him for his neutrality in the selection and appointment of Obas in any part of the state.

The Governor later had an interactive session with the monarchs.