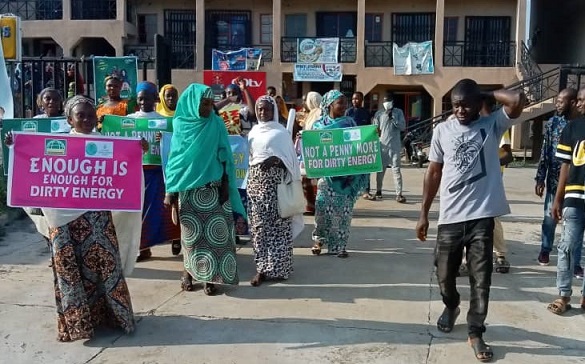 The Socio-Economic Research and Development Centre SERDEC have called on the government to stop licensing coal mining operators, reduce greenhouse gas emission and boost investment in renewable energy in Nigeria.

The call was made by the Executive Director, SERDEC, Mr. Tijani Abdulkareem during a protest rally on the activity of illegal mining and its effect on host communities within Kogi State held in Lokoja.

Mr Abdulkareem explained that coal mining in Kogi State had led to extensive environmental degradation including the contamination of community airspace, water, and soil leading to health, insecurity, and livelihood challenges for local communities.

He urged the government to carry out an environmental audit of coal mining sites in Kogi State, investigate human rights violations perpetrated in host communities, and violation of undocumented community development agreements entered into by companies carrying out coal mining activities within the host communities.

Mr Abdulkareem bemoaned the need for government to diversify fossil fuel production to renewable sources of energy, noting that Africa has the richest solar resources of any continent but with less than one percent of the world’s total installed solar power capacity, this has affected industrialization and small and medium enterprise development.

The Johnson: “Tears wouldn’t even allow me to type” -Jennifer