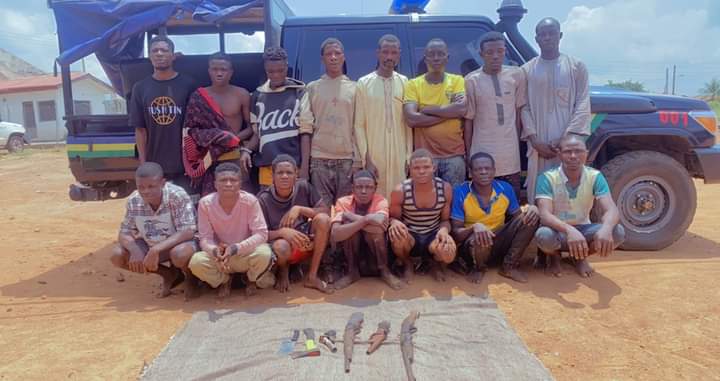 Police in Ekiti have arrested 15 suspected arm robbers, drug dealers, and cultists and recovered arms amongst others as part of the ongoing effort of the Command to rid the State of criminal elements, particularly Atikankan area of the State.

The Spokesperson, Ekiti Police Command, DSP Abutu Sunday said on the 13th of July, 2022 the operatives of the Command clamped down on a group of hoodlums in their criminal hideout at Atikankan, Ado-Ekiti.

DSP Abutu according to the statement on Tuesday said during the operation which was carried out by the operatives of the Rapid Response Squad (RRS), fifteen suspected drug dealers, armed robbers, and cultists were arrested.

DSP Abutu said Items recovered from the suspects are 2 locally made single barrel guns, 2 battle axes, 2 locally made pistols, and some wraps of weeds suspected to be Indian hemp

In Investigation, the suspects confessed to being members of an armed robbery gang, illicit drug dealers, and cultists.

According to DSP Abutu, Ekiti state CP Moronkeji Adeshina has ordered that the suspects be arraigned accordingly as soon as the investigation is concluded.

We Will Curb Medical Tourism in Nigeria – Buhari