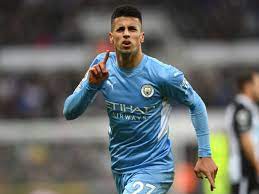 Joao Cancelo has been handed the No.7 shirt at Manchester City ahead of the 2022-23 season, succeeding Raheem Sterling following the latter’s exit to Chelsea.

The full-back has been handed a starting shirt number at the Citizens by Pep Guardiola this term, having previously worn No.27 since his arrival in 2019 from Juventus.

Gifting a number traditionally associated with forward-focused players to a defensive figure could well be an eyebrow-raising decision this term at the Premier League champions – but it actually follows in both Cancelo’s own history and adds to a rich lineage.

What numbers has Cancelo worn before, and who else has had seven at City?
It will not be the first time Cancelo has worn seven at club level, having previously held the number during his time with Inter.

It also maintains continuity with his previous City number of No.27, and the No.70 he wore during his career with Benfica.

Outside of Sterling, it also means he follows Georgi Kinkladze, Stephen Ireland, David White, Peter Barnes, Mike Summerbee and Robbie Fowler as other former holders of the seven shirt.

Julian Alvarez meanwhile has been granted the No.19, while new goalkeeper Stefan Ortega will take No.18 this term.
(Goal)