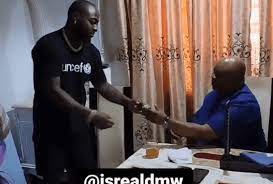 Nigerian singer Davido has gifted his uncle, Senator Ademola Adeleke one of his wristwatches worth ninety million naira.
The music star gifted the wristwatch to the senator who recently won the Osun governorship election at his palatial home in Ede, Osun State.
This is coming barely 48 hours after INEC declared Adeleke of the Peoples Democratic Party as the winner of the July 16 gubernatorial election in Osun State.

Adeleke polled 403,371 votes to defeat the incumbent governor of the state, Gboyega Oyetola, who polled 375,027 votes.

The PDP candidate won the governorship election with 28,344 votes.
Adeleke won 17 of the 30 Local Government Areas in the state.

This is the second time Adeleke and Oyetola will face each other in a gubernatorial contest.

In 2018, Oyetola defeated Adeleke after a rerun, which took place in seven polling units.

The incumbent governor won the election with 482 votes.
(Pulse)

What you probably don’t know about Late Ada Ameh