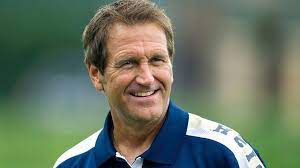 Nigeria coach Randy Waldrum is not coy over the likely threat posed by Morocco in Monday’s Women’s Africa Cup of Nations semi-final encounter.

Rasheedat Ajibade’s second-half strike helped the Super Falcons secure a 1-0 victory over Cameroon in the quarter-final.

For the North Africans, they silenced Botswana 2-1 to reach the last four – their best performance ever since making their debut in 1998.
The reigning African champions may be outstanding favourites to reach the final, however, the American tactician feels the Lionesses of Atlas also have a chance when both countries face off at the Prince Moulay Abdellah Stadium in Rabat.

“I saw them for the first time in September and I was very impressed by the quality of their team and by the football they play,” Waldrum told the Caf website.

“I said as soon as I arrived in Morocco that they are the team that can surprise. I know how this team has developed for three years now.

“They are one of the best teams in the competition and are capable of beating any other team.

“We have respect for Morocco and the way they have played in this tournament. It’s a big challenge for us.

“Certainly, we have a lot of experience and a lot see us as favorites, but in football everything is possible and we have to be ready for this game.”

Regardless of what coach Waldrum thinks, one of her star players Ngozi Okobi is bullish about the Falcons’ prospect of qualifying for a record tenth final.

“No matter who we face, whether it’s the host country or whatever, its football… we have to be ready to win and qualify for the final,” she said.

This will be the first encounter between both countries at the international level, albeit, Nigeria boast a strong Wafcon reputation – ruling the continent for a record nine times.
Reynald Pedros’ women go into this crunch encounter fuelled by their impressive form. They are unbeaten in their last twelve outings across all competitions.

Morocco’s last defeat was against Spain, bowing 3-0 to the Europeans in an international friendly played on October 21, 2021.