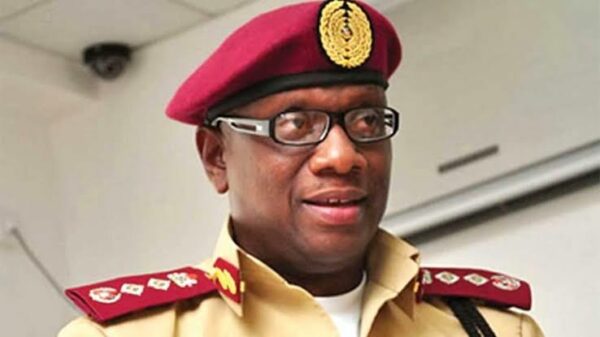 This was confirmed in Abuja on Monday by the Corps Public Education Officer, Bisi Kazeem, an Assistant Corps Marshal.

He said Oyeyemi was among the pioneer staff of the FRSC at its inception in 1988 and was first appointed to head the organization by President Goodluck Jonathan’s administration in July 2014.

He succeeded Osita Chidoka, who was the first Corps Marshal to be appointed from outside the FRSC.

In July 2018, he was re-appointed to serve another four-year term by President Muhammadu Buhari.

As part of Oyeyemi’s departure from the corps, some activities have been lined up to hold in the next week and will be rounded off with a traditional pull-out parade in Abuja on Monday, July 25.

He is also expected to deliver a lecture on Thursday, July 21.

Kazeem said there was no information yet on Oyeyemi’s successor, saying that it is the prerogative of the President to appoint the helmsman.

However, the outgoing Corps Marshal is expected to hand over to the most senior officer in the FRSC hierarchy, Dauda Biu, a Deputy Corps Marshal currently in charge of Finance/Accounts.

Biu will run the organization until a substantive Corps Marshal is appointed.

“Countdown to the Corps Marshal’s departure started on November 28, 2021, when he marked his birthday, only about three months to the 34th anniversary of the FRSC, established in February 1988.

“To state that the Federal Road Safety Corps has witnessed impressive strides under the leadership of Dr. Oyeyemi would be stating the obvious.

“His legacies, achieved through dint of hard work and ingenuity in management, would always remain a part of the soul of the lead road safety agency in Nigeria.

“His attitude has always echoed the spirit and ethos of the corps in road safety management and this is exemplified in the laudable footprints he has left in the agency,” Kazeem said.

According to him, in creating the FRSC about 34 years ago, the founding fathers had envisioned a road safety agency to be defined by modernity and positioned to manage road safety issues.

“They also conceived an agency where personnel would be willing and ready to render selfless service to bring sanity to the road, reduce road traffic accidents with their attendant fatalities and injuries as well as bring succour to all road users.

“These are the ideals that the FRSC represents and to which the successive leaderships of the corps have been committed in order to ensure its attainment and sustenance.

“Today, though it might not yet be Uhuru yet, in terms of having a completely crash-free nation or fully realized the vision of creating a safe motoring environment, every discerning Nigerian is convinced that FRSC has done a lot.

“This is so, considering its modest achievements and Boboye’s giant stride in the agency has contributed in bringing it to where it is today.

“Taking over the daunting task of steering the agency towards greater heights about eight years ago, Oyeyemi had brought a lot of innovations to bear.

“From the deployment of body and vehicle cameras for officers to the establishment of a control room for operations and the efforts toward the introduction of digital driver’s license to curb theft and other related crimes, among others, the Corps Marshal ensured a transformation of the agency for better,” the statement said.

Speaking at the unveiling of body cameras, operation monitoring, and control platform, to improve the corps’ field operations across the country late last year, Oyeyemi remarked that the initiative would improve transparency and accountability in the activities of the corps nationwide.

He added that the platform was designed with the needs of the public taken into consideration as the corps goes about the task of making the operation of FRSC more responsive.

Oyeyemi also said that it was evidence of a fostered innovation to tackle challenges in patrol operations and its strong commitment to surmount all obstacles in delivering on its mandate.

According to him, the platform is significant, due to its multiplier values to the corps and by extension, national security.

Also, during a dinner to mark the 34th Anniversary of the FRSC some months ago, he had assured that the corps would remain focused to the attainment of its mandate of creating a safe motoring environment and achieving a situation where road traffic crashes result in no death in the country.

As anyone who has worked with him can testify, the Corps Marshal is not a man inclined to just talking.

“He would rather let his actions – that is, his achievements – do more of the talking for him.

”As a pioneer staff that not only played a role in the birth of the FRSC, but has also been part of its growth and development trajectory since then, Oyeyemi recently remarked.

“I have worked with others as a team since I came on board in not only keeping it on course, but have taken it to greater heights as is evident from the successful completion of all projects.

“This feat remains the most credible affirmation that FRSC has come to stay and a testimonial that the corps will justify the confidence reposed in it by Nigerians.”

He did not forget to pay tribute to the founding fathers of the corps and all relevant stakeholders for toiling day and night to give Nigeria an organization that has today become the reference point in quality service delivery to the people.

This, he said, has made the corps he best and inevitable example of a lead agency in Africa as declared by the World Bank.

“We must acknowledge their foresight for setting a goal that has showcased Nigeria with a world class organization from which other nations takes a cue in matters of road safety management and traffic administration.

“I must equally appreciate all successive leadership of the corps for working hard to sustain the ideals upon which the corps is anchored,” Oyeyemi said.

“In line with its commitment to continually improving its mode of operation, the corps was in January 2022, re-certified on ISO 9001:2015.

Oyeyemi stated that the back-to-back re-certification, among other strides, was a testament to a highly motivated workforce.

“In its contribution to road safety management in Africa, the corps championed the establishment of the West African Road Safety Organization (WARSO). The corps will continue to support other African countries to achieve their set objectives,” Kazeem further stated.

Highlighting other developmental achievements in which he played a major part, he disclosed that the corps also activated volunteerism in road safety administration through its arm of volunteers.

This he said, has led to a situation where the corps is being supported by about 15,000 volunteer Special Marshals, excluding other variants such as Celebrity and Honorary Special Marshals.

Oyeyemi said that the corps successfully sought the infusion of Road Safety studies in the curricula of primary and post-primary schools in Nigeria.

Similarly, FRSC also introduced the concept of Road Safety Clubs in Primary and Secondary schools, as well as among members of the National Youth Service Corps.

“The corps has over 160,000 members of the Road Safety Club nationwide.

“Also with the support of the federal and some state governments, Nigerian Road Safety Partnership (NRSP), International Road Assessment Program (iRAP), local and international donor agencies, and individuals, the corps has improved on its critical infrastructure and operational equipment.

“From a modest five-bedroom story building at Bodija, Ibadan at the inception of the corps in 1988 and few staff, the agency has rapidly grown with its headquarters in Wuse, Abuja,”

The out-going FRSC boss said that the corps had expanded its operation with 12 Zonal Commands nationwide, 37 Sector Commands in the 36 States of the Federation, and FCT for operational and administrative presence.

“The corps similarly has seven Corridor Commands, 245 Unit Commands, additional 54 Outposts, and 764 Station Offices (LGA offices) across the country to widen its operational, rescue, and data coverage to enhance its service delivery.

“The institutions are designed to cater to the training needs of staff, State Traffic Agencies, and other clients,” the outgoing Corps Marshal was quoted as saying.

Oyeyemi said that it was worthy to mention that FRSC Academy had received approval from the National Universities Commission to commence post-graduate degree programs in affiliation with the Federal University of Technology (FUTO), Owerri, in Imo State.

He disclosed that the corps was also partnering with African Development Bank (AfDB) to establish a Centre of Excellence in Road Safety studies in Africa at the Academy.

“In pursuit and sustenance of a world-class status, permit me to mention that the Corps has established a functional 24-hour ultra-modern FRSC Call Centre.

“This is to receive and route emergency calls through 122 toll-free numbers for easy communication to the Call Centre, especially by first responders.

“In addition, the corps has established Field Operations Monitoring and Control Centre (FOMCC) for real-time monitoring of activities of our field operatives via body-worn cameras deployed with field operatives.

“Other installations of the corps are One signage plant for the production of road signs; 21 staff clinics, 28 roadside clinics and medical centers to service staff, road traffic crash victims and the public, officers mess; National Traffic Radio (NTR) on 107.1 FM for promoting better driving culture, “he said.

In a recent interview, the FRSC boss also expressed appreciation to President Muhammadu Buhari for his support to the corps, saying that in 2016, he {the President} approved an intervention fund that led to the procurement of about 343 vehicles that enhanced daily operations.

This was followed by yet another approval in 2020 to inject more vehicles to further boost the efficiency of the corps.

He added that within the past eight years of his administration, the corps had constructed, inaugurated, and equipped 16 State Sector Commands and fully completed all uncompleted projects through the support of the Federal Government.

Oyeyemi had also shown a good working relationship with sister agencies comprising the military and paramilitary organizations, which put the FRSC in good standing today.

According to him, for the over 34 years of the corps’ existence, these organizations have extended hands of fellowship in various ways and stood by the corps in molding and shaping an agency that today is the best in Africa.

Oyeyemi had a fulfilling working career that has seen him serving in various capacities in the corps.