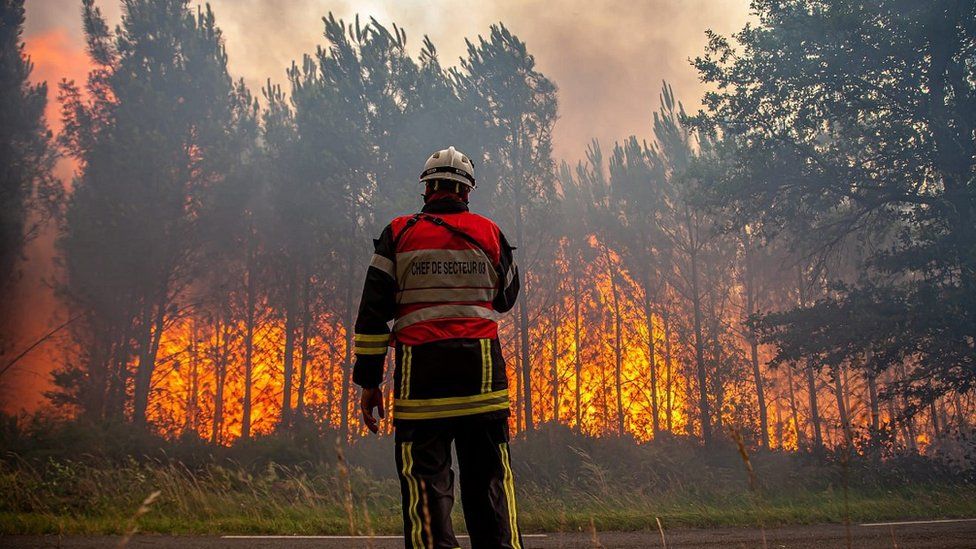 France has evacuated more than 16,000 people threatened by wildfires in the south-west, as fires also spread in Spain, Croatia and Greece.

Authorities in France’s Gironde, a popular tourist region, have evacuated guards from campsites – the tourists left earlier. Fires have spread in the Teste-de-Buch and Landiras areas.

In southern Spain, more than 3,200 people fled fires in the Mijas hills, though later some were able to return.

Portugal’s fires are contained for now.

More than 1,000 deaths have been attributed to the heat in Portugal and Spain in recent days.

The Mijas fires in Spain are not far from Málaga, a popular tourist area. Elsewhere in Spain, wildfires have broken out in the provinces of Castilla y León, Galicia and Extremadura.
Ellen McCurdy, living in the Málaga area, told Reuters: “We just grabbed a few essentials and just ran really, and by that stage everybody along the street was on the move… there were a lot of ambulances and fire engines.”
Across the Mediterranean – from Morocco in the west to Crete in the east – thousands of firefighters and many waterbombing aircraft have been deployed. Since Tuesday, the whole region has been sweltering in severe heat, leaving vegetation bone dry.

Heatwaves have become more frequent, more intense, and last longer because of human-induced climate change. The world has already warmed by about 1.1C since the industrial era began and temperatures will keep rising unless governments around the world make steep cuts to carbon emissions.

The French weather service has forecast temperatures of up to 41C (106F) in the country’s south on Sunday and new heat records are predicted for Monday. In Portugal, the temperature recently reached 47C.

In the UK there is a red warning for extreme heat across parts of England, as the country braces for record temperatures on Monday and Tuesday, possibly reaching 41C in some parts.
Dr Eunice Lo, a climate scientist at Bristol University, told the BBC that “rising temperatures are a signature of climate change” and that in the UK, 2,000 extra deaths a year were attributable to heatwaves.

Public records show that since 1884, the top 10 hottest years in the UK have all been since 2002, she said. Globally, “heatwaves are becoming more common and lasting longer,” Dr Lo added. “We need to stop burning fossil fuels, and act now and quickly.”

Morocco has ordered more than 1,300 people to leave their homes and deployed more firefighters to tackle forest blazes in the north. The worst-hit area is Larache province.

In Crete, Greek firefighters are battling a big blaze in the hills around Rethymno, on the north coast. On Saturday they said it had been partially contained.

Some areas in south-west Turkey and on Croatia’s Adriatic coast are also struggling with wildfires. A number broke out near Croatia’s resort towns of Zadar and Sibenik, but they have not forced any major evacuations.

One resident in south-west France described the forest fires as feeling “post-apocalyptic”. Fires have burned 10,500 hectares (26,000 acres) of land there and Interior Minister Gerald Darmanin praised firefighters’ “remarkable courage”.
“Everything went so fast – the fire too, was big, big, big,” Manon Jacquart, 27, told the BBC. She was evacuated from the campsite she works at early on Wednesday morning, and slept at a shelter near Teste-de-Buch where hundreds of other people also sheltered from the danger.

“I’m just worried, I’m afraid… I’m trying to be as strong as I can but I’m not ok… I want to forget this week,” she said.

Meanwhile, climbers in the Alps are being urged to postpone their trips to Mont Blanc due to the risk of rock falls caused by “exceptional climatic conditions”.

Heatwaves put the public at greater risk of heatstroke, heat exhaustion and drowning, as people rush to cool off, Dr Lo said. Pets and farm animals are also vulnerable.

“Even fit and healthy people are at risk,” she said, though the most vulnerable are young children, the elderly and those with underlying health conditions.

In Portugal, fires have destroyed 30,000 hectares (75,000 acres) of land this year, mainly in the north. That is the worst fire damage since the summer of 2017, when devastating fires killed some 100 people.
In southern Spain, holidaymakers on the beach in Torremolinos saw big plumes of smoke rising in the hills.

Planes have been dropping a fire retardant substance, as helicopters shuttle to and from the coast, collecting seawater to douse the flames.

“There are about 40 houses in our area, everyone was really nervous and standing outside or on balconies watching it,” said local resident Ashley Baker.

“Even now there are fires at the top of the mountains. It moved away from here, I’m very relieved.”

In Italy, the government has declared a state of emergency in the desiccated Po Valley – the country’s longest river is no more than a trickle in some places.
(BBC)