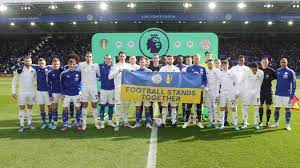 Arsenal and Everton went head-to-head in a friendly match to support charity Football for Peace (FfP). The Premier League teams met on Saturday in Baltimore, Maryland, to raise funds to support the dedicated charity partner at the Charm City pre-season event.

The charity Football for Peace aims to create a new era of peace and prosperity for communities across the United States. The charity’s mission in Baltimore is advocating and building frameworks through sports around issues on equality, water sustainability, well-being, education, and the environment.

What is Football for Peace?
The charity is based in the United Kingdom, India, and Chile and is supported by the United Nations.
FfP is now launching its USA branch with NFL top cornerback Josh Norman its founding board member.

The organisation hopes to use football to help create an inclusive, sustainable and resilient future for young people.

The clash between Arsenal and Everton was intended to support Baltimore create young leaders who will do good deeds to create positive changes in themselves and their communities.

What has been said about Football for Peace?
Arsenal coach Mikel Arteta was delighted to be part of such a good cause, saying: “Everyone at Arsenal is proud to be joining with Everton in supporting Football for Peace USA – a fantastic cause in making a positive impact to people’s lives.”

Meanwhile, Everton boss Frank Lampard added: “We were proud to show our support for Football for Peace at today’s game. The organization is doing fantastic work in tackling crucial issues across the globe – focusing on the younger generation – and now they are bringing that work right here to the city of Baltimore.

“The local children who walked out with the two teams today will remember this day for the rest of their lives – and they played a role in delivering a truly important message.”

Founding partner Norman believes the match between the English teams will do a lot to help the charity, saying: “It’s great for Football for Peace to be charity partner of the Everton VS Arsenal match. As professional athletes, we consider football to have a unique ability to reach far beyond ethnic, religious, or social differences and we hope to make a lot of positive impact in the USA.”
(Goal)

TMG Commends INEC, Osun Residents, Others on the Success of Guber Poll